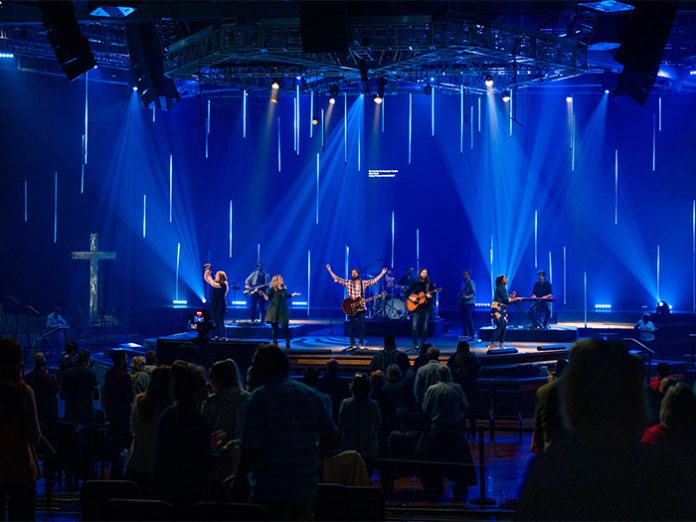 Highly regarded nationwide for its varied and superlative worship music, New Life Church in Colorado Springs has brought its audio technology up to the same level of excellence with installation of a new Meyer Sound LYON line array reinforcement system in the main worship space, known as The Living Room. After his first two Sundays mixing on the new system, Technical Director Evan Duran was enthusiastic about the improvement.

“The difference is incredible, it almost leaves you speechless,” he said. “Over the years, we had learned to work within the limitations of our old system and squeeze good performance out of it. But with what we’re stepping into now, we don’t have those limits on what we can do. And it’s not just from the standpoint of power, but also the clarity and linearity — the faithfulness to what’s happening on stage. Whatever we put into this system, that’s exactly what we hear coming out.”

Built in 2004, The Living Room is a hexagonal structure with a capacity of nearly 8,000 in the round. In the current configuration, with the stage and video screens along one section, maximum occupancy is around 5,000. Each of the five remaining sections is now uniformly covered by a dedicated array of eight LYON line array loudspeakers.

“From the outset, uniform coverage was a primary consideration,” said Evan. “With the old system you could move 10 feet to one side and hear a different tonal balance. But from the moment we fired up the LYON rig, I could walk across a section, from one side to the other, from back to front, and have the exact same experience.”

To maintain precise uniformity, each array comprises four LYON-M main loudspeakers on top for the longer throw, with four LYON-W wide coverage models underneath for the closer seating areas. Stage front fills are 10 compact LINA loudspeakers, the smallest in the sonically cohesive LEO Family. Fifteen 1100-LFC low-frequency control elements — flown three per section in cardioid configuration — fill out the deep bass. When maximum bass impact is desired for youth events, the 1100-LFC elements can be lowered to the floor to leverage half-space coupling. System drive and optimization is handled by two GALAXY 816 Network Platforms, with comprehensive monitoring available via the RMS network.

The music program at New Life Church is known for diversity as well as quality, which was another deciding factor in favour of the Meyer Sound solution, according to Evan.

“We have summer youth events with everything from screaming guitars to rap to techno, and this system will handle them all. But on Good Friday, we had a string quartet. The LYON system replicated everything intimately, with each instrument in its own space, as if you were sitting right in front of the players, with no PA in between. To have an experience like that in a room this size is truly remarkable, and it takes some impressive technology to achieve.”

New Life Church has a membership of more than 10,000, with eight congregations meeting at multiple locations throughout the Colorado Springs area, and with services held in three languages. The church suspended in-person worship for several months in 2020 during the COVID-19 lockdown, with attendance gradually restored in stages to the current level of approximately 3,000.