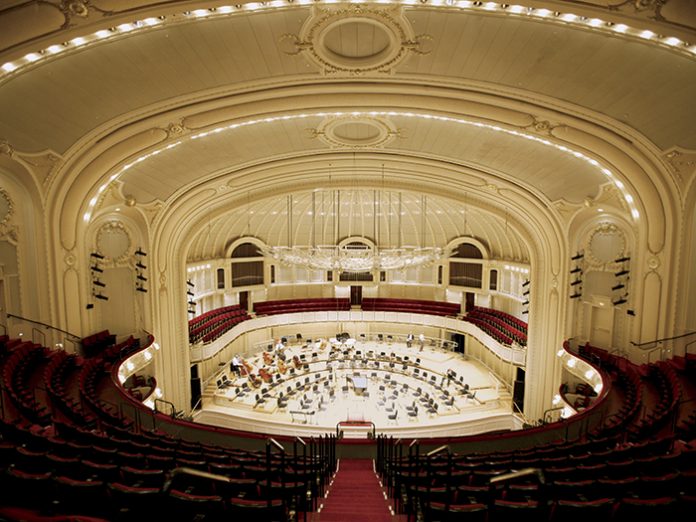 Chicago’s historic Orchestra Hall recently updated their audio production capabilities with the installation of a new sound reinforcement system based on LINA line array loudspeakers, the newest and smallest member of Meyer Sound’s LEO Family. In addition to normally unamplified concerts by the resident Chicago Symphony Orchestra, the resplendent 2,521-seat venue also hosts a range of amplified jazz and pop concerts and special events that will benefit from the power, linear response and uniform coverage of the compact and discreetly colour-matched new loudspeakers.

“We are extremely pleased with the upgrade of our in-house system, and we are grateful to Meyer Sound for their guidance and support from early in the design process through installation and calibration,” states Vanessa Moss, vice president for orchestra and building operations for the Chicago Symphony Orchestra Association. “We are delighted with the clarity of sound and increased coverage to all seating areas in Orchestra Hall.”

The Meyer Sound system was provided by TC Furlong, a company based in suburban Lake Forest that has worked closely with the Chicago Symphony Orchestra Association for more than two decades. “The old system we provided had served them well but it had become less and less rider-friendly,” recalled company president TC Furlong. “Early in a long decision process, before LINA had been introduced, we brought in a LEOPARD line array system for a Joan Baez concert, and they were very impressed. But when it came time for final design, it turned out that LINA would have ample power while also offering a slightly narrower horizontal pattern to stay off the walls, a smaller profile, and lower cost. So it checked off all the boxes.”

For Chicago Symphony Orchestra Association Production Manager Jeffrey Stang, the new Meyer Sound system proved a perfect fit for a hall built long before the era of amplified sound. “Orchestra Hall is an intimate performance space for its size, but it’s also very vertical with multiple seating levels with seating beneath each of the overhangs,” he relates. “Achieving even coverage to these areas while avoiding excessive levels for those sitting near the speakers was challenging. But as the new LINA system was designed and calibrated to meet the unique needs of Orchestra Hall, we now have direct sound arriving at seats where direct sound could not reach before. Strategically placed area fills for intelligibility enhance this even more. For overall sound clarity, coverage, aesthetics and cost, the Meyer Sound LINA system had the best overall solution.”

The terrace seating around the rear of the stage benefitted greatly from the beam steering technology in the CAL 64 loudspeakers, according to Jeffrey. “It was important to improve the intelligibility in those seats, especially for vocals both spoken and sung, but we also wanted to avoid bouncing sound off walls or having it spill onto the stage. The beam-steering capability of the CALs let us steer sound into that curved shape and bring it directly to the seats.”

Other celebrated concert halls relying on CAL loudspeakers for immaculate sound reinforcement when appropriate include the Concertgebouw in Amsterdam, Konzerthaus Berlin, and both the Musikverein and Konzerthaus in Vienna.

Notable concerts using the new system in Symphony Center to date include performances by Herbie Hancock, Punch Brothers, Branford Marsalis, Zakir Hussain, and Ahmad Jamal, among others. The system was also put to use in 2019 for two films, North by Northwest and Harry Potter and the Prisoner of Azkaban in Concert, all with live accompaniment by the Chicago Symphony Orchestra. The CSO also will likely use the system for future pop concerts or contemporary electronic compositions when amplification is specifically required.

Orchestra Hall is the largest venue in the multi-faceted Symphony Center. Designed by famed Chicago architect Daniel Burnham, Orchestra Hall was built in 1904 and underwent a major renovation between 1995 and 1997 which included installation of the prior audio system.