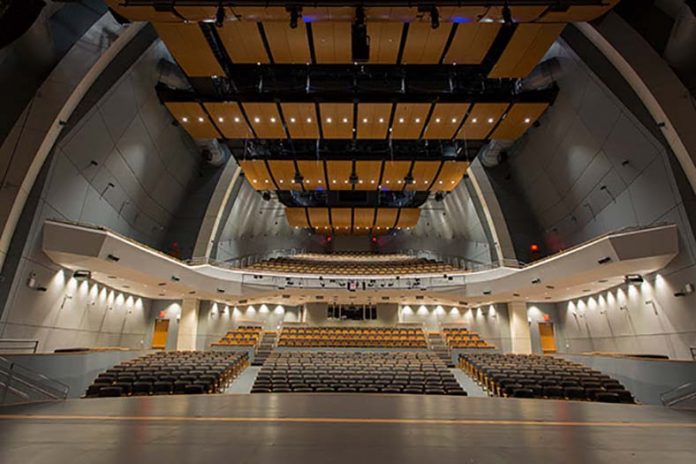 Following a major renovation that involved gutting the main building and constructing an entirely new auditorium inside the old structure, Washington D.C.’s Duke Ellington School of the Arts reopened with a stunning performance space that offers the flexibility of Meyer Sound’s Constellation acoustic system. Dubbed ‘The Egg’ because of its novel curved shape, the new venue hosts the school’s own acclaimed music, dance and theatre ensembles as well as performances by renowned guests including the National Symphony and U.S. Navy Band. Whenever direct amplification is required, the new auditorium also provides a house reinforcement system based on Meyer Sound line array loudspeakers.

With the acoustical flexibility afforded by Constellation, the auditorium’s acoustic signature can be precisely tailored to the performance at hand while the active stage shell component of Constellation allows student performers the opportunity to hear themselves and others in the ensemble in an optimum environment. Audience members are often not aware that the Constellation system is even active during many acoustic performances, yet the rich acoustical ambience has generated more enthusiastic responses while raising the engagement level of student performers.

The Constellation system was specified as a core component of a complete audio, video, acoustics, IT and security package designed by Warrenton, Virginia-based Polysonics, an acoustics and technology consulting firm.

“Constellation is the most thought-out approach of all the options available,” said Polysonics’ president and CEO Gordon Jacobs, the lead consultant on the project. “It’s an all-inclusive solution from one supplier, with all self-powered loudspeakers. When you also factor in the research behind it and the culture of the company, it was a no-brainer.”

The Constellation system was designed and calibrated by Meyer Sound’s Constellation team, with installation by Washington Professional Systems of Wheaton, Maryland under the direction of Don Pacetti, Eric Chocrun and Todd Neil.

Day-to-day operation of the system falls under the responsibility of Thom J. Woodward, the school’s audio instructor and AV supervisor. In the first months of operation he has learned when to unleash the system’s full capabilities, and when to hold back and let the room’s physical acoustics take over.

“There is definitely a huge difference when you turn on Constellation,” he noted. “Probably the biggest improvement I noticed was with the wind ensemble. The sound was good on stage in rehearsals, but when you turned the system on it really filled the room, and you got a much better sense of intimate musical presence rather than the instruments being swallowed up in space.”

But there are other times when a more subtle enhancement is called for, or even none at all. “When the event is reliant on the room itself as an acoustical instrument, that’s when Constellation really shines,” he continued.

For events that require direct amplification, ‘The Egg’ relies on an LCR system with left and right arrays of 10 per side MINA line array loudspeakers and a centre array of 12 MINA loudspeakers. Deep bass is reproduced by four 1100-LFC low frequency control elements, with a Galileo Callisto 616 processor for drive and optimisation.