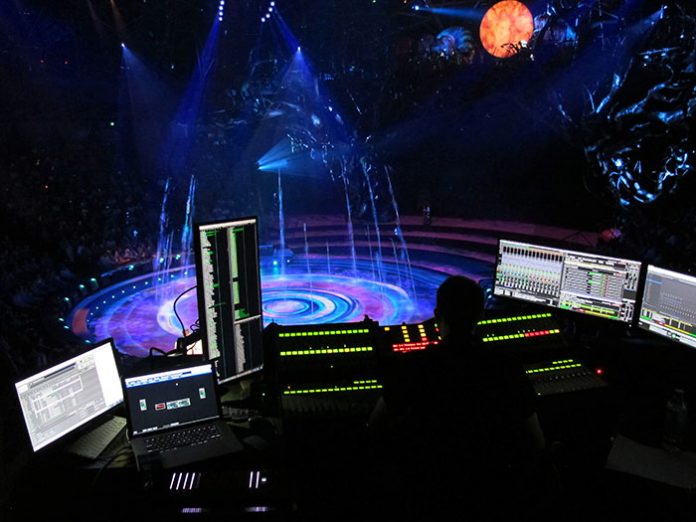 Corrado Campanelli, who was hand-picked by Dragone to design sound for the production commented: “Having D-Mitri integrated with Space Map definitely expanded my creative options. Working in the round, with two layers of surrounds, I could think in a much more immersive way with all music and sound effects. With the press of a button, the operator can dynamically move sounds three dimensionally around the space, immersing spectators in the action.”

The sound system design was a collaborative effort, with the original proposal by Colbert Davis of California’s Thinkwell Group specifying D-Mitri and most of the loudspeakers. Due to changes in the building structure and the show’s musical concepts, the loudspeaker and D-Mitri configurations were later augmented or modified by Campanelli.

One visual concept central to the show was that the dome over the central pool would be part of the visual effects, which in turn meant that the loudspeakers had to be largely hidden. This presented challenges for covering a large-volume, 1,183-seat venue.

Corrado delved further into the system: “We could not have large line arrays hanging down in view, so instead we deployed a main inner ring of ten UPA-1P loudspeakers as the main system, and a delay ring of 23 UP-4XP loudspeakers under the surrounding soffit. In addition, we deployed two more rings with a total of 59 smaller loudspeakers for the dynamic surround effects.”

With this configuration and Space Map in mind, Corrado worked closely with Dai Show composer Michael Brennan to leverage the possibilities. Corrado provided further comments: “Since this was all original music, I could work with him to identify instruments or sounds that could be dynamically moved during the performance. I do not know of any system other than D-Mitri that can accomplish this as easily and effectively. It is very beneficial to work with a single principal supplier for the entire system, from program inputs through loudspeakers. It was 100% routing through Meyer systems, from D-Mitri and CueConsole through the Galileo processors and into the loudspeakers. Knowing that everything is fully compatible and we have one source of excellent technical support – it made set-up much easier.”

The Dai Show Theatre is located at the Xishuangbanna International Resort in Yunnan Province, a 16 square-kilometre development of the Wanda Group.

Other current and past Franco Dragone productions featuring Meyer Sound systems include The Han Show, ‘The House of Dancing Water’ in Macau, ‘Paris Merveilles’ at the Lido de Paris, and Celine Dion’s ‘A New Day’ in Las Vegas.