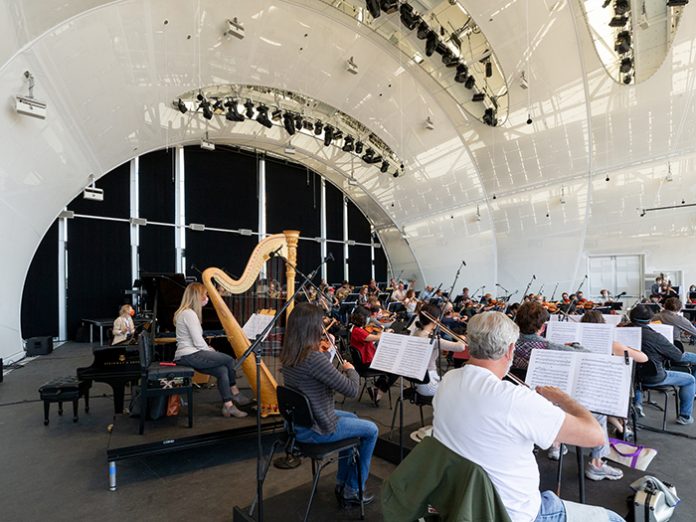 A striking new addition to the San Diego skyline, The Rady Shell at Jacobs Park was built to host open-air concerts by the San Diego Symphony. The sheer size of the bayside structure — 57 feet high, 92 feet wide at stage front — makes it amenable to hosting large productions while enabling orchestra musicians to hear and respond to one other as well as they would in a top-tier concert hall.

To create an optimum acoustical listening environment that can be fine-tuned for various performances, a Meyer Sound Constellation acoustic system has been installed inside the shell — making it the first Constellation system designed for stage acoustics in an outdoor venue. The Rady Shell at Jacobs Park opens August 6.

“The sound onstage is unbelievable,” San Diego Symphony Music Director Rafael Payare told reporter George Varga of The San Diego Union-Tribune. “We can hear each other wonderfully and you feel like you are in one of the top-notch concert halls of the world.”

Equipping the shell structure with an active acoustic system for monitoring was strongly recommended by Shawn Murphy, an Oscar-winning film score mixer (and frequent FOH engineer for high-profile outdoor orchestral events) who served as special consultant to the symphony. Meyer Sound’s Constellation team designed the acoustic system, with complementary physical acoustics entrusted to Salter, the project’s acoustical and AV consultant.

Because many performances at the venue — most notably amplified pop or rock — would not use the Constellation system, the Salter team was given a two-fold brief: design a baseline acoustic that would support Constellation but would also provide a good environment when Constellation was off.

“As far as the acoustic signature inside the shell, it is quite similar to a large Hollywood sound stage,” says Salter Vice President Jason Duty, who took over as principal acoustician on retirement of David Schwind. “It has a mixture of diffusive and absorptive elements, but little for reflection across the stage because that is handled by Constellation. We didn’t want it totally dry, as they wanted the stage to have a bit of life when the system was off. We definitely understood what the Constellation team was looking for.”

For Duty, the shell structure’s size, location and variety of performance styles made active acoustics the preferred solution. “Constellation is incredibly helpful in situations like this. The venue is right on the harbor, and having the control to let musicians clearly hear players on the other side of the stage is beneficial. In addition, there is the flexibility to adjust the acoustics to what you are hearing in the moment.”

As installed, the Constellation system comprises 25 UPM-1XP and 22 UPJunior‑XP remotely self-powered loudspeakers, with 12 UMS-1XP remotely self-powered subwoofers to extend the reverberation envelope to the lowest registers. DSP for driving the system is supplied by an eight-module D‑Mitri® digital audio platform, with two modules dedicated to hosting the patented VRAS variable room acoustic algorithm. Ambient sensing for the regenerative reverberation is provided by 20 Schoeps MK41 microphones with CMC6 preamps. System integrator for the project was Solotech.

For music director Payare, the technical wizardry results in one simple outcome: a better environment for playing music. “From the very first rehearsal we had at The Shell, it was fantastic,” he told the Union-Tribune. “The Shell has a mind-blowing, organic quality. You actually can hear the (different sound) balances and perform the way you would in a concert hall, not an outdoor venue.”

The Rady Shell at Jacobs Park was a vast undertaking, with a number of other key players involved, directly or indirectly, with audio and acoustics. Tom Schindler of Salter took charge of AV system design, with Joshua Grossman contributing on behalf of Schuler Shook Theatre Planners and Lighting Designers. Architect Greg Mueller of the San Diego-based firm Tucker Sadler Architects was lead designer and architect of record of The Rady Shell at Jacobs Park, and Soundforms and its London partners Flanagan Lawrence, Expedition and ES Global designed the performance shell. Rob Webster of Gardiner & Theobald provided design and construction project management, and Vice President of Venue Operations Travis Wininger served as a project liaison on behalf of the San Diego Symphony.

Thanks to San Diego’s famously mild weather, the new venue anticipates year-round operation. It will host more than 100 concerts and events a year, either by the symphony or other organizations, promoters or convention groups. Although Constellation was installed principally for the San Diego Symphony, it will be available with the symphony’s approval for use by other classical or acoustical music ensembles performing at The Shell.