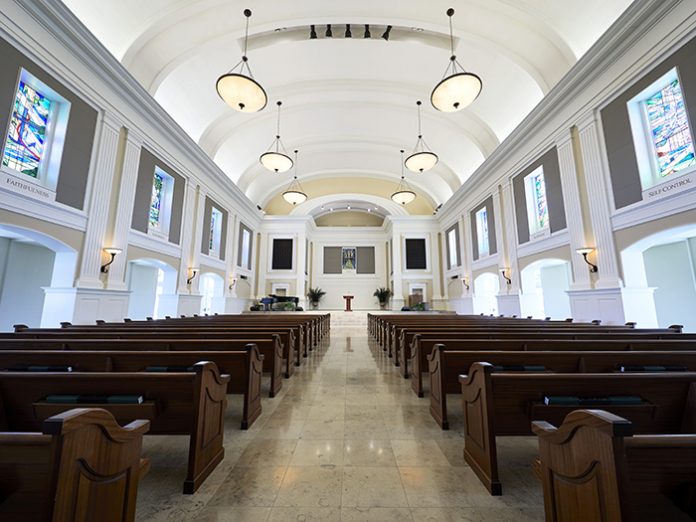 Two markedly different churches in the Southwest have found a common solution in Meyer Sound’s CAL column array loudspeakers, with each deploying systems that combine precision-tailored coverage for optimum intelligibility with a barely noticeable cabinet profile.

Prestonwood Baptist, one of the largest multi-campus churches in the Dallas area, has seating for up to 7,000 in the main auditorium at its Plano campus. But for more intimate gatherings — weddings in particular — the campus also offers the 550-seat Faith Chapel. Although built in the 21st century, the traditional architecture harkens back to an earlier era, with stained glass windows, an arched barrel ceiling, and a reverberation time that is fine for orchestral music but highly detrimental to speech intelligibility.

“The reverberation time was so long to the point where, if somebody was standing 15 feet away from you when the room was mostly empty, it was hard to understand what they were saying,” said Mark Coble, audio and acoustics specialist for Springfield, Missouri-based Paragon 360, the AVL design-build firm brought in to remedy the situation.

The original solution had placed line arrays mounted behind grille cloth in faux organ chambers to either side of the chancel. The arrays had ample power, according to Coble, but lacked the precise control needed to avoid exciting the room.

“The church was adamant in not wanting to change anything about the feel of the room, and that included keeping all loudspeakers essentially invisible,” continued Mark. “And that’s why we proposed a Meyer Sound CAL solution.”

The new system comprises two CAL 96 loudspeakers mounted discreetly to the inside of the grille openings, with the beam tilt and spread of one CAL 96 spotlighting the lower seating and the other focused narrowly on the rear balcony. Two very small UP-4slim loudspeakers anchor the sound imaging for the front rows while two 750-LFC low-frequency control elements behind the grilles supply low-frequency extension.

“We had looked at options from different manufacturers, but the precise beam shaping of the CAL 96 gave us the pattern control that was necessary for this space,” noted Mark, “And keeping everything off that ceiling was a high priority.”

Despite the forbidding acoustical and aesthetic challenges, the chapel sound overhaul has exceeded expectations, said Mark. “The level of satisfaction was very high because we accomplished something that seemed almost impossible, and Meyer Sound and CAL played a critical role. It was the 100% best solution to a problem for which they initially thought there was no possible solution.”

Commenting on behalf of the church, Prestonwood Baptist Director of Media Bryan Bailey said: “Honestly, the CAL loudspeakers do things I wouldn’t believe possible unless I had heard it. The system has raised the bar of excellence, and given us an end product that is less distracting and higher quality that we had before.”

About 250 miles to the north, the First United Methodist Church of Tulsa faced a similar dilemma in the main sanctuary of its Tudor Gothic-style building. Completed in 1928, prior to any considerations regarding sound reinforcement, the church struggled with poor intelligibility due to high reverberation times, and was similarly loathe to mar the historic architecture with bulky speaker boxes. In this case, the Meyer Sound CAL solution was implemented by the Ford AV Worship Technology Group of Tulsa under the leadership of Jeremy Ball.

“Their prior system comprised small column array loudspeakers combined with point source delay loudspeakers,” said Jeremy. “The resulting coverage was poor, and there was a noticeable lack of coherency between the column arrays and the delays. Also, the point source speakers were intrusive to the architecture of the church.”

Working with Meyer Sound Design Services, the Ford AV team proposed anchoring the system with two CAL 96 loudspeakers, again with beam tilt and spread precisely shaped to cover only the seating areas, front to back with no rear delays, and doing so without exciting the reverberant architecture. The front-most pews and side transept seating areas are covered by petite UPJunior and UP-4slim loudspeakers, also custom colour-matched to blend into the masonry of the church walls.

“The church had poor results previously using a column array solution from another integrator, so we knew we had one shot to make it right,” said Jeremy Ball. “We had heard the CAL at some of the Ford AV showcases, so we were familiar with the precision of the beam steering and the coherency with other speakers in the Meyer Sound line. Also, the Meyer Sound self-powered solution was preferred as there was no room for a second or larger rack in the dedicated space.”

Ball attended the first worship service following system commissioning to verify results. “Members of the congregation were offering praise, saying they had never heard that level of intelligibility in the church,” he recalled.

The church leadership was equally impressed at how this new technology could bolster their core mission. “People were telling me they were glad to be able to hear in spots that used to be dead,” said Executive Pastor Aaron Tiger. “And that means they were not just able to understand the talking, but that they were able to hear the Word of God and have their hearts inspired. If somebody comes in here and can’t hear, it’s hard to experience the good news.”