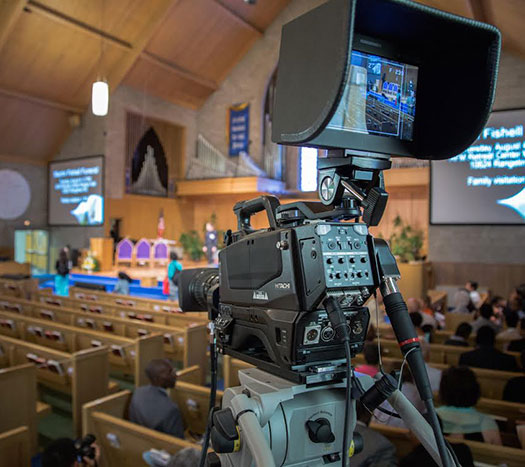 The nearly 60-year old Pioneer Memorial Church, a Seventh-day Adventist institution located on the campus of Andrews University in Berrien Springs, MI, has long used audio and video to bring services to congregants both in-house and off-site via live streaming. Upon migrating video operations to high-definition, the operations staff looked to Hitachi on the acquisition side, selecting five Z-HD6000 HDTV cameras to capture services in the main auditorium and pulpit.

“When we made the switch to HD, we wanted a camera that offered full broadcast quality at a reasonable price, as we had other equipment we needed to purchase,” said Jonathan LaPointe, Interim Media Director for the Pioneer Memorial Church’s Media ministries department. “We liked the Hitachi Z-HD6000 because it was a fully functional broadcast camera with great picture quality, but very affordable. The price-to-performance value was unbeatable.”

Nick Wolfer, Production Director for the Seventh-day Adventist corporate headquarters in North America, previously served in LaPointe’s role at Pioneer Church. He echoes Jonathan’s comments on the price-to-performance side, noting the depth of field characteristics from its three 2/3-inch MOS sensors and interconnectivity options as key user benefits.

“We wanted something that could easily handle backhaul video when we needed to return video to the stage prompters,” said Nick. “SMPTE fibre connectivity was a must to avoid continual breaks at the connection points you get with multicore cable; and to give us the distance we needed for remote productions across the larger university campus where we reside. Hitachi provided these and other interconnectivity features at a much more reasonable price than other broadcast camera manufacturers.”

Another advantage of the Hitachi Z-HD6000 is its ease of use, which was especially beneficial for Pioneer Church’s team of some 50 volunteers. Importantly, the quick learning curve ensures that the in-house staff can train new volunteers to operate the cameras within an hour. This is helpful for both live in-house productions during weekend services, as well as the occasional recorded productions for special events.

“The camera had to be easy to use so that our volunteers can use them without much hand holding,” Jonathan said. “I am also impressed with the camera’s dynamic range [F12 standard sensitivity with more than 60dB of video headroom]. Our stained glass windows in the Sanctuary, with the sun shining through, are quite bright but the cameras simultaneously capture detail in those windows, as well as the darker interior of the Sanctuary. The Hitachi cameras capture a great colourful image that our congregants really appreciate.”

Nick sees a spread of Hitachi cameras across more Seventh-day Adventist studios and houses of worship given the cost-efficiencies and feature-rich design. Hitachi cameras are also in use today at the organisation’s TV studio at its world headquarters, as well as several remote TV studios and at Loma Linda University Church, the largest Seventh-day Adventist Church in North America.

“The feature set is exactly what we need and the price point is perfect for those of us that live and die by donated dollars,” said Nick. “I can turn to my donors and say ‘we have maximised your donations’, as we have everything we need in a camera to enhance ministries. And Hitachi’s customer service is second to none, which goes a long way in extending the lifecycle of these cameras.”

Jonathan added: “At the end of the day, I can say that these new cameras have brought us to a whole new level of production capability and quality that our members have come to appreciate. That’s important for us to get our message out, in any way we can, and have it resonate with the people. It’s a huge step up from where we were before.”