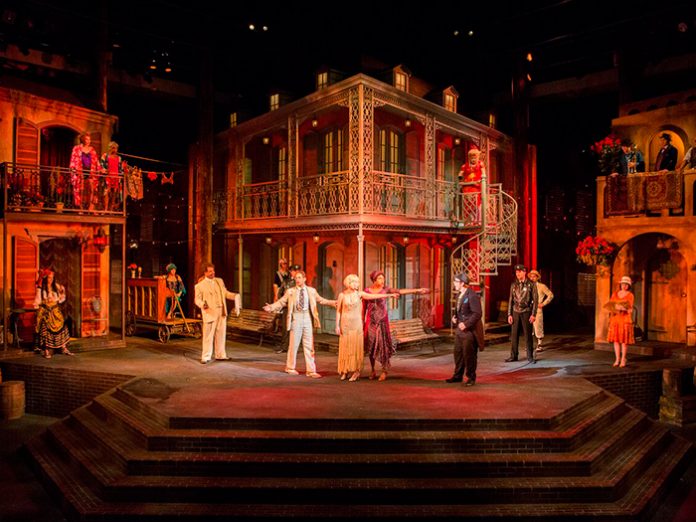 When San Diego’s famed The Old Globe continued its commitment to excellence by announcing a $200,000 audio upgrade of its Lowell Davies Festival Theatre, audiences cheered as Masque Sound,a leading theatrical sound reinforcement, installation and design company, was called upon to provide the new state-of-the-art equipment package for the beloved outdoor Shakespeare stage.

The internationally-acclaimed, Tony award-winning The Old Globe is one of the most renowned regional theatres in the country, and has stood as San Diego’s flagship arts institution for over 80 years. The Old Globe produces a year-round season of 15 plays and musicals on its three stages, including its highly-regarded Shakespeare festival. The Old Globe has become a gathering place for leading theatre artists from around the world. Additionally, numerous Broadway-bound premieres and revivals have been developed at the theatre and have gone on to enjoy highly successful runs in New York and at regional theatres across the country.

“When the Lowell Davies Festival Theatre was rebuilt following an arson fire in 1984, sound wasn’t prioritised as it is today, said Paul Peterson, Sound Director, The Old Globe.” Because of this fact, speaker position and placement was not taken into account for reinforcement, where the job is to support or enhance the actor’s voice as naturally as possible.”

In 2012, The Old Globe hired a new artistic director, Barry Edelstein, who is one of the leading Shakespearean minds in the country. When Barry arrived and heard the sound at the outdoor theatre, he felt the existing system could do more in service of the text and merited a reevaluation aimed at better support for Shakespeare’s words. Edelstein felt that audibility and clarity were areas for improvement, and that the balance of the system should tilt more toward enhancement than acoustic speech. Better amplification would absolve actors of having to project and thus would allow for more nuance and naturalism in their delivery.

“Barry asked us to work with New York-based consulting group, ACME Sound Partners to solve the challenges of the stage,” added Paul. ACME was chosen because of their work on the Delacorte Theater, New York City’s outdoor home of the annual Shakespeare in the Park. At the Delacorte, they suspend speakers over the audience using an aircraft cable, creating positions you would normally have in a theatre with a roof over it. The speakers are placed right out of the audience’s line of sight, but they greatly improve the sound department’s ability to reinforce the actors in a clear, non-interfering way, accomplishing the goal.”

ACME determined they were going to have to fly roughly 20-22 cabinets over different locations of the venue. “We selected cabinets from Meyer Sound, which is one of the leaders in theatrical reinforcement,” added Peterson. “Meyer Sound speakers do a great job reproducing human voice in an intelligible and clear manner. Once we knew what we needed to buy, I contacted Masque Sound. We have a long relationship with Masque Sound and were thrilled to be able to work with them again. The company’s experience in specifying the sound system for the Delacorte was also a major benefit for us.”

Through Masque Sound, Peterson purchased Meyer Sound’s Galileo processers and amplifiers, specifically UPJs, UPA-1Ps, UPQ-1Ps as well as MM-4s. ACME Professional also provided some additional equipment to the venue including Meyer UP4-XP speakers. The project is currently in the second year of what is expected to be a three to four year process. The main part of the upgrade, choosing the speakers and their locations, is complete. In the next year, the Old Globe plans to purchase a DiGiCo SD10T console, which will give them the power, flexibility and features to properly mix a theatrical show. For the upgrade, the Old Globe also plans to address the wireless mics and lavaliers and add some additional loudspeakers.

Masque Sound understands the needs of the theatrical sound community and on top of that they work very efficiently and reasonably to meet your demand on time and within your budget, adds Peterson. Not only have we been thrilled with the results, the entire company has been pleased, and our audiences have been raving about the improved capacity for us to deliver Shakespeare’s text.”