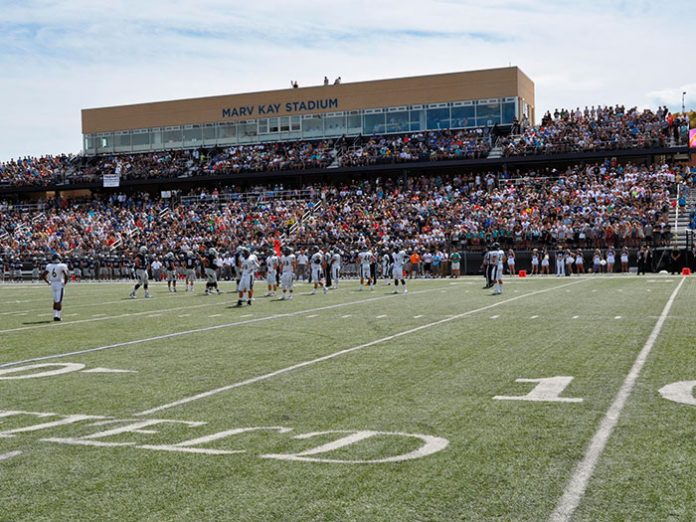 Football at Colorado School of Mines is a tradition dating back to 1893. In September 2015, Mines celebrated the opening of its new 5,300 seat “Marv Kay” stadium with meeting and event rooms, a large press box and VIP suites, dedicated sports medicine and strength training spaces and a new sound system with Community R SERIES loudspeakers.

Tom Falgien of consulting firm WJHW designed the stadium’s new sound system. Tom said the planning and needs analysis began in August of 2013 and involved the stadium’s architectural firm and the school’s athletic staff. The school wanted even coverage for the field and for both home and visitors seating with high voice intelligibility and plenty of level to overcome crowd noise. They also wanted a modern system with extended frequency range and high musical sound quality to enhance the fan experience.

To achieve these goals and meet the school’s budget, Tom chose a point-source system design using three Community R6-51 loudspeakers located inside of the scoreboard at the end of the field. He said: “a scoreboard system offers both good value and performance for this type of project.”

Crown amplifiers power the system with a BSS London DSP, Allen & Heath Qu-16 digital mixer and Tascam CD player. The system includes a Shure announce microphone and Lectrosonics wireless mics for the referees with a hand-held wireless for field use. 17 Community DP6 pendant loudspeakers serve the strength training room and 20 Community D6 ceiling loudspeakers are installed in the suites and press box.

Integrator AVI-SPL installed the stadium’s audio system. The installation was completed in time for the Oredigger’s first game of the season, a victory over South Dakota School of Mines. Project Engineer Michael Bobela noted that the design was very thorough and the system “fills the whole valley from three speakers”. Tom noted: “the football team loves the new sound system and would like to have it turned on at every practice and use it all the time.”