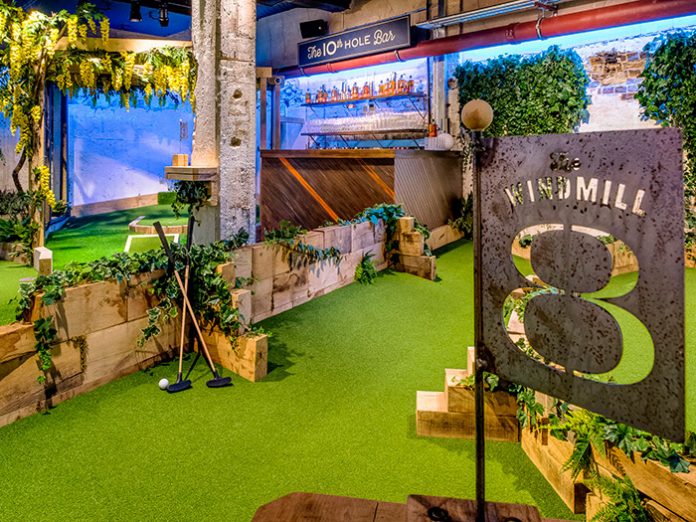 Run by the Institute of Competitive Socialising (ICS), it not only hosts corporate crazy golf sessions for the business world — bringing the outside, indoors — but, then transforms the 16,000 sq. ft of space into a more upbeat vibe after dark, with nightly DJs. It is described as an environment of “competitive socialising.”

MSL are just one of a number of integrators who have made the CDD their ‘go to’ solution since its spectacular launch in Frankfurt 15 months ago. Director Darrel Olivier says that after seeing the Swingers operation, run by Jeremy Simmonds and his business partner Matt Grech-Smith, prototyped at a short-term pop-up in Shoreditch, he was excited by the prospect of equipping the quirky underground venue opposite the Gherkin in Leadenhall Street with a full AV integration.

Darrel stated the following: “We were asked to provide very high quality and evenly distributed audio system which could be ramped up for the night time trade. While MSL have fitted 24 CDD8 (8”) speakers and a total of five CSX112 (1 x 12”) subs around the two golf courses.” However, it is for the Clubhouses that Darrel has reserved the most potent sound. Here he has placed four CDD8 and a powerful CSX212 (2 x 12”) sub for the DJs after dark, with a further four CDD6 in the Lower Clubhouse bar and 10 x CDD6 in the Upper Clubhouse on the mezzanine level.

Moving through the building MSL have specified four CDD6 in the Private Dining Room and six CDD8 in the general dining area. Elsewhere, there are a pair of CDD5 (5”) in Reception, four CDD6 in the Entrance, eight further CDD5 in ancillary areas, such as Corridors, Washrooms and Toilets. The entire system is driven by Powersoft M-series amplifiers.

The installers have also designed an intuitive series of presets and routing commands programmed into the BSS DSP, with source select and global volume control. Darell and his team worked closely with the operations team at Swingers, to create different presets for volume at different times of the day and because of the inherent reverberation in the building worked hard on the gain structure of the individual input channels to make sure the best sound was delivered. By installing so many CDD enclosures the team were able to compensate for the challenging environment.

Inputs are derived from BGM, DJ, live feeds, various AV inputs and there is a separate aux audio input. Two 65” Sony commercial display screens have been detailed — one for the Private Dining area and the other for the leader board — connected and run by WyreStorm HDBaseT matrix HD video switcher, with headroom for future proofing.

Summing up, Darrel Olivier stated that he and others in his department are massive Martin Audio fans: “CDD works well, looks good, provides even coverage and represents exceptional value, while the variety of Martin Audio bracketry gives us enormous flexibility. Because we spec so much CDD I know it like the back of my hand. And when clients see your confidence in a system it helps you negotiate the sale.”

Jeremy Simmonds concluded with an equally positive notion: “This is a challenging environment in which to achieve top quality sound, particularly given the challenges presented by the building and the many different areas within our scheme. CDD handles everything thrown at it while Darrel and his team have integrated and programmed all the AV technology in such a way that the system works for our needs as the atmosphere changes from lunch time right through to the early hours.”