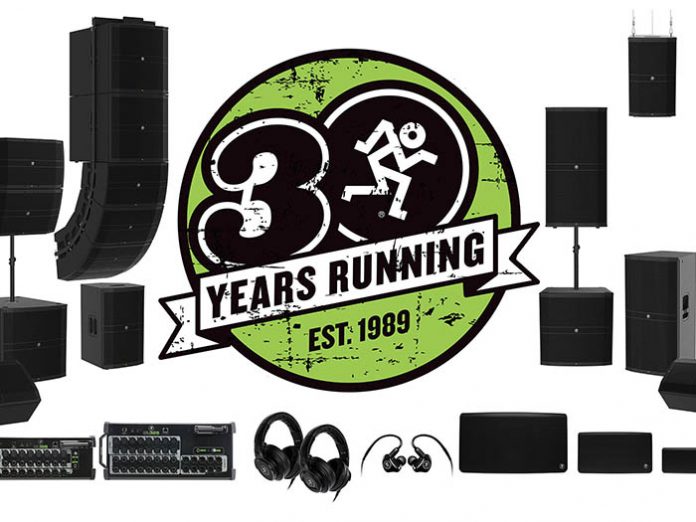 Mackie today announces 30 years since they made their mark on the pro audio industry and are celebrating all their incredible customers that have made it possible. Mackie’s history is full of breakthrough products which have gone on to create and define a number of new categories like the LM-1602 that was originally shown at The NAMM Show in 1989, and other classics like the CR-1604, HR824, SRM450 and MCU. Over the past three decades, pushing the industry forward with innovative designs, Mackie has delivered professional sound quality and “Built-Like-a Tank” reliability at a price working musicians and engineers could afford since 1989.

“Celebrating 30 years is about recognising our customers around the world that have put their trust in our gear,” said Shaunna Krebs, Mackie Marketing Director. “They are what made this possible, and we look forward to the next 30 years providing great gear for Mackie fans everywhere.”

To celebrate, Mackie will be giving away CR-Buds Earphones daily at the demo room plus you can also get your hands on a limited edition 30th anniversary Mackie t-shirt. Mackie is also an official sponsor of the John Lennon Educational Tour Bus who will be giving away FreePlay Series Bluetooth speakers. Mackie is also proud to be the official headphone sponsor of the NAMM Idea Center where all attendees there will be using Mackie’s MC Series headphones.

This year, Mackie is found in more places than ever. Entering new categories with products like MP Series In-Ear Monitors, MC Series Headphones, and FreePlay Series Bluetooth Speakers. Mackie is also raising the bar with their all-new DRM Series Professional Loudspeakers that utilise the latest technology, quality components, and meticulous design for sound that needs to be heard to believed. Mackie will be demoing the DRM Series throughout the show on the hour starting at 10 AM. Continuing the anniversary celebration, Mackie will be hosting cake cutting events Thursday through Saturday at 5:30 PM at their demo room as part of their 30th anniversary celebration while providing a comprehensive demo of their all-new DRM Series Loudspeakers.