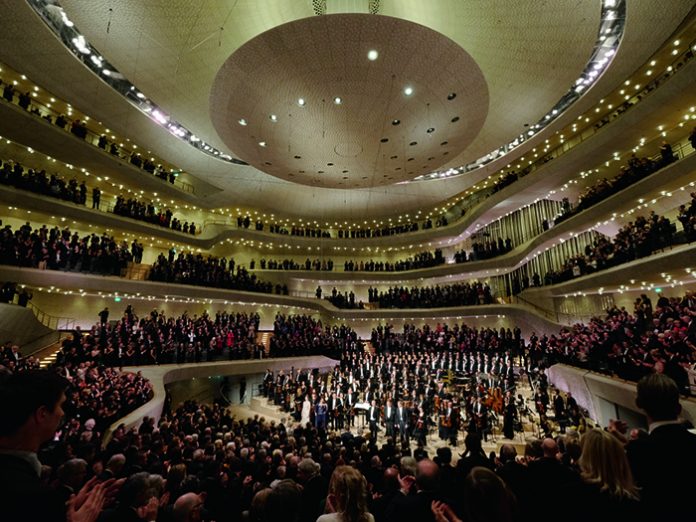 In January 2017, the Hamburg Elbphilharmonie was ceremoniously opened featuring a stunning building design by the Swiss architects Herzog & de Meuron. This marked the beginning of a new chapter in the history of the Hanseatic city’s landmarks. Just one year later, the Elbphilharmonie has secured its place among the world’s top concert halls and has become a must for every visitor to the city, so it’s not surprising that in the 2017/2018 season almost 900,000 visitors attended around 700 events.

The building has two concert halls as well as a 244-room hotel and 45 exclusive private apartments under its roof – it is also equipped with professional technology in all areas – like MA Lighting solutions.

Mike Neumann, master of event technology at the Elbphilharmonie, explained: “The Great Hall with its 2,100 seats and the Small Hall with 550-seats were primarily designed for perfect acoustics. The lighting technology was regarded as rather secondary in the initial planning phases. However, we were able to adapt this considerably, and are now using grandMA2 consoles for both areas at the highest technical levels. This allows us to use network functionalities such as back-up solutions and networked controls to access elements like house lighting, and it also gives us headroom for future requirements.”

“All aspects of MA’s reputation, built up over the past decades, spoke in its favour,” Mike continued. “Reliability, ease of use, and we are always at the cutting-edge of technology with it. We hardly ever had any problems with our consoles – and that is with around 600 productions a year! If there was ever an issue, we could rely 100% on the support of the German distributor Lightpower.”

Matthias Baumgartner, who also works in the technical project management of the Elbphilharmonie, added: “We work with a wide variety of protocols here, including MA-Net2, Art-Net and sACN. An example of how we use the network is that in the Small Hall we control the light from the backstage area via an MA onPC command wing, while the grandMA2 light serves as a back-up. This allows lighting to be adapted directly to the requirements for TV recording or transmission. The LED lighting in the foyer can also be integrated into the lighting ‘mood’ to have an overall concept both inside and outside the halls.

“Basically, we distribute the control signals in the building using the MA-Net2 protocol,” Matthias continued. “The DMX signal for the fixtures is then sent to the MA xPort nodes. For back-up, we distribute the signals in a secondary way as sACN protocol. Our dimmer system processes both types of signal, and if one source is missing, the second independent signal is there and ready. A complex KNX bus system is installed in the house for our regular house lighting control. So that both worlds can talk to each other, we also use Art-Net for communication and value comparison. All signals are transmitted in a redundant network via separate V-LAN.”

Mike concluded: “The Elbphilharmonie is a very complex building. Many of the requirements we have to meet here are unique and posed major challenges during the planning phase. Our aim was to design the lighting in such a way that it could be used as flexibly as possible and at the same time meet the extremely high requirements for low noise levels, fire protection and personal protection. We have already taken a big step and can now say that we can meet many, if not all, project requirements. Of course, we owe this to our entire team, who do a great job and can switch from one major project to another almost overnight.”

The lighting technology department of the Elbphilharmonie includes Mike Neumann and Matthias Baumgartner, plus a team of around 25 people who take care of all the technical requirements for concert operations.