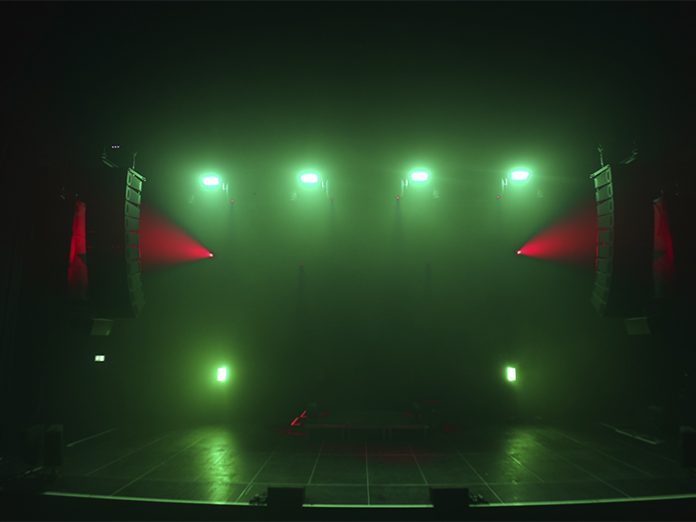 When Rockhal first chose an Adamson IS-Series loudspeaker system for their Club hall, it was intended for deployment following a long-planned renovation to the venue; a project was postponed due to the pandemic’s onset in 2020.

Although live shows were also put on hold, the venue did have an opportunity to use the Adamson system in a different configuration than they’d expected to. Specifically for a series of ‘Because Music Matters’ shows, during which the system was deployed in a unique, 360-degree configuration around a central stage. Mounted in March 2021 in partnership with the Luxembourg Ministry of Health and The Arena Resilience Alliance, the five-concert series was an effort to evaluate how future events could be held safely and sustainably in Rockhal, across the continent, and beyond.

Although initially specified for a more straightforward left/right hang, the Adamson loudspeaker rig not only provided the necessary flexibility for what were, obviously, unusually challenging circumstances but garnered high praise from those in attendance. “It was powerful, precise, and pleasant-sounding,” Rockhal’s Head of Audio, Franck Chainais noted when discussing the implementation of the IS-Series system at the time. “One got the impression of being one metre away from the speakers even when they were fifteen metres away.”

Eventually, Rockhal was able to complete the renovation, a project that upped the room’s capacity from 1,200 to 1,600 with the addition of a balcony and allowed the venue to deploy the Adamson rig in the more conventional layout they’d envisioned originally.

With the IS-Series superior coverage and audio quality, Rockhal’s taken a definite leap forward from its previous audio infrastructure. “The last audio system was installed in 2005. Although it worked well, we want to be a state-of-the-art venue,” said Rockhal’s Technical Manager, Elmar Hubert. “Our goal is always to invest in our customer’s experience.”

Located in the Centre de Musiques Amplifiées, Rockhal is one of Luxembourg’s premier venues – a multi-purpose, multi-venue space that attracts audiences from well beyond the small nation’s borders. Part of that draw is due to its location in Esch-sur-Alzette. A town whose proximity to France, Germany, and Belgium makes Rockhal a go-to venue for local and regional acts and global superstars alike. While the location is one reason many artists are attracted to the venue initially, what keeps them coming back is Rockhal’s reputation for consistently deepening its ability and flexibility to provide stellar experiences for artists and audiences alike.

That flexibility is, in part, a product of having three decidedly different live spaces: the 6,500-capacity Main hall, the Floor, and the Club hall. “But live events are only part of what we do here,” Hubert explains. “Rockhal was founded in 2005 to be a hub for amplified music. We have a recording studio, a dance studio, six fully-equipped creation, rehearsal, and production rooms. We also work very closely with other European institutions to support musical acts,” he adds, citing Rockhal’s membership in the European Arena Association, which consists primarily of facilities with a minimum capacity of 12,000. “So, Rockhal is an important venue.”

Installed by Lumicon (a Luxembourg-based arm of German-based integrator Show Sisters), the system consists of ten Adamson IS10 per side, three IS119 subs (flown beside each main array in a cardioid configuration), two ground-stacked IS219 per side (also in a cardioid configuration), and six IS7p loudspeakers mounted in pairs as out, in, and lip fills. Power is provided via Lab Gruppen D Series amplifiers; a pair of D 120:4L and D 80:4L for the IS10, three D 40:4L for the IS7p, and two D 200:4L driving the subs.

The project also involved the provision of Dante connectivity in the Club hall to seamlessly integrate the venue’s pre-existing DiGiCo SD12 and Lake LM44 with the new system. That connectivity will provide even greater flexibility. “We can change the routing for the amps with the Dante controller, and we can also integrate this system with another because we have a Dante connection everywhere in the building,” says Rockhal’s Head of Audio, Franck Chainais.

In choosing an ideal loudspeaker solution, several factors were considered, not least of which was ‘rider friendliness.’ Adamson is one of the top three loudspeaker brands regularly requested in the Club hall (and, increasingly, in the Main hall). And although Hubert and Chainais believed an Adamson loudspeaker system would be a good fit, “We still kept an open mind,” Hubert said.

Previously, Chainais has come across a variety of Adamson systems in his capacity as a touring systems tech and FOH engineer. “And I’ve always been very satisfied with them, so we organized a demo to compare the IS-Series with other products to see if it was the correct PA.”

That demonstration was key to their choice, Hubert says, explaining that not only was their technical team convinced by the performance of the system, so was everyone invited to have a listen. “The response, even from people who don’t know as much about audio – our administration and booking staff – was ‘Wow.’ They couldn’t explain it in technical terms but felt something was different, and they were all convinced by what they heard.”

As integrator Marko Schneider of Show Sisters/Lumicon put: “We had two days in the room and tried different things, and it was clear to them that this was a very good system for this room. The size, the coverage, the precision of the high-end, high-mids, and sub-bass were all important. So, after the demonstration, they made the decision very fast.”

Compared to the other options: “When I heard the IS10 in the renovated space the first time, it was clear that this system provided better stereo separation,” Schneider continues. “With some systems, you only hear that separation if you’re standing directly in the middle or not far from the middle of the room. But with the IS-Series system, you can go farther left and right and still have that stereo image.” That’s good for listeners and FOH engineers. “When you’re mixing, it’s easier to be very precise with the transients and highs, so you don’t need to work as much with effects. The IS10 system sounds much more open.”

Beyond that, Adamson’s dedicated assistance throughout the process also figured heavily in the choice of the IS-Series. “With Adamson, we had the best support. We had a sound designer who was very interested in Rockhal and a very good relationship on a sales and technical level,” Hubert concluded. “They are a valuable technical partner, and we’re proud to have an Adamson system at Rockhal.”

Since the return to the concert business in February 2022, immediately after the completion of the renovation and final system commissioning, the combination of the Adamson rig and the newly added real estate has enhanced the live experience substantially with improved sightlines, a more intimate setting for artists and audience members alike, and, naturally, class-leading audio quality.