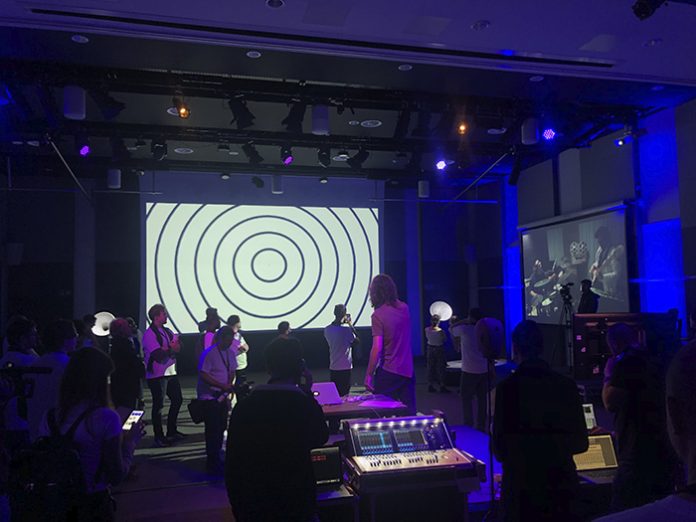 The annual Innovation In Music conference is an international music event that brings together researchers and professionals who are shaping the future of the music industry. The event welcomes academics, artists, producers, engineers, music industry professionals, and manufacturers to come together and hear presentations and discussions on a wide range of topics.

The most recent conference was held at the University of West London’s Ealing Campus and covered a number of topics including music production, performance and composition, studio technology innovation, and platforms for music sale, streaming and broadcast, to name a few.

Dr. Paul Ferguson, Associate Professor of Audio Engineering from Edinburgh Napier University, has been exploring the potential of long-distance creative collaboration over IP networks. This years’ conference keynote was sponsored by Dante licensee, Focusrite Pro, who was very interested in exploring the possibility of using their products and Dante technology over a long distance.

“My area of research for several years has been in looking at remote music performance and production over high-speed networks; we’re very fortunate that in the education world, we’re connected by high-speed networks for research purposes,” said Ferguson. “At Napier, we use Dante to link studios and resources here on campus, but I always predicted that local and long-distance collaboration could come together.”

Dante is the de facto standard for digital audio networking, and distributes hundreds of uncompressed, multi-channel digital audio via standard Ethernet networks, with near-zero latency and perfect synchronization. Dante allows audio, control, and all other data to coexist effectively on the same network.

At the conference, Ferguson and Edinburgh Napier University co-researcher Dr. Dave Hook worked with the London team to demonstrate a performance featuring a total of eight musicians playing together. Several musicians were spread out in different spaces around the University of West London — all using Dante-enabled Focusrite RedNet interfaces — and one of the musicians was in Edinburgh, Scotland, some 400 miles away.

“As far as we know, this was the first time that Audinate’s Dante was used to connect performers over a conventional network of such a distance,” said Ferguson. “This was a real game-changer because it demonstrates that studios, education establishments, and performers ultimately will be able to collaborate over a great distance and use Dante just as they are now in connecting resources locally.”

The workflow demonstrated at the Innovation In Music conference has since been successfully repeated between Edinburgh and Berlin, a distance of more than 1000 miles.

“We’re very excited about this, especially in terms of what’s happening now with COVID-19, we’re all desperate to connect,” said Ferguson. “With a Dante network and with Dante Domain Manager controlling the zones, we know we can now connect education establishments, and I’m sure studios and production houses will jump on this quickly. This is one of those things once you know it’s possible, then we’ll get loads of people doing it.”

Dante Domain Manager is network management software that enables user authentication, role-based security, and audit capabilities for Dante networks while allowing seamless expansion of Dante systems over any network infrastructure. Dante Domain Manager organizes a network into zones called “domains” that each have individual access requirements, making it clear and easy to know who can access any area of the system. All activity is logged, tagged, and date-stamped so problems can be quickly identified and solved.

“We all know that Dante Domain Manager allows you to create and manage separate subnets — connecting various types of studios, workstations, and resources within a facility — but usually within the same building or campus, perhaps just a few miles away,” said Ferguson. “But what happens if a studio needs to connect to a broadcaster that’s geography separated by a great distance? The problem, it turns out, was with clocking.”

Commercial streaming of audio over the internet is now common and works at long distances, but that type of audio is unsynchronized, compressed and generally very high latency due to the lack of reliable timing. Using a long-distance network, Ferguson realized that with two new Dante Domain Manager features — support for SMPTE 2110 / AES67 compliant devices in Dante workflows, and support for GPS Synchronization — would allow for a completely synchronized, lossless system that spanned hundreds of miles with incredibly low latency.

“This was an excellent advancement for network audio; basically, we can forget about clock issues. Now each network subnet can be locked to a GPS satellite clock in its immediate proximity,” said Ferguson. “Those satellites are all linked and have a common shared time, so wherever you’re connected and clocked around the globe, it’s effectively the same world clock. This is a huge and immediate win for universities and education establishments around the world using Dante networks and Dante Domain Manager can now connect to and collaborate with other locations within their education system, or connect with other universities, such as we have.”

GPS synchronization allows for each zone to be governed by its own master clock, keeping the devices at each site locked. With clock limitations overcome, a Dante network can perform over any distance, passing the full bi-directional channel count without a glitch. Full technical details and system diagrams from the December event can be found in the Focusrite case study here.

With Ferguson’s live performance demonstration, latency was undoubtedly a concern. Yet, even with a firewall to contend with, early tests revealed a 9.5ms round-trip time for data packets sent from London to Edinburgh and back. But with the nature of the university network being live, it meant that at peak times, the traffic would force this round-trip time to 15ms or more, with occasional peaks of up to 30ms.

“There’s certainly a trade-off between acceptable latency for the musicians versus system performance,” said Ferguson. “We erred on the side of caution and set the buffer on our interfaces to 20ms at each side for a total of 40ms overall, an absolutely usable threshold for the synth textures we were getting from Edinburgh.”

With the success of the demonstration, Ferguson now predicts that long-distance collaboration within education will flourish, but also sees the capability having logical equivalents for commercial use.

“Unfortunately, the COVID-19 virus has brought a new perspective to performing, and for gigging musicians, this GPS clock capability potentially allows musicians to safely connect and collaborate over hundreds of miles,” added Ferguson. “What happens when artists want to do their next album or collaborate with others? Until our work lives return to normal, this presents an excellent, next-best-thing-to-being-there option. And even after the ban is lifted, this will be an economical and efficient way to bring creativity together over great distances.”