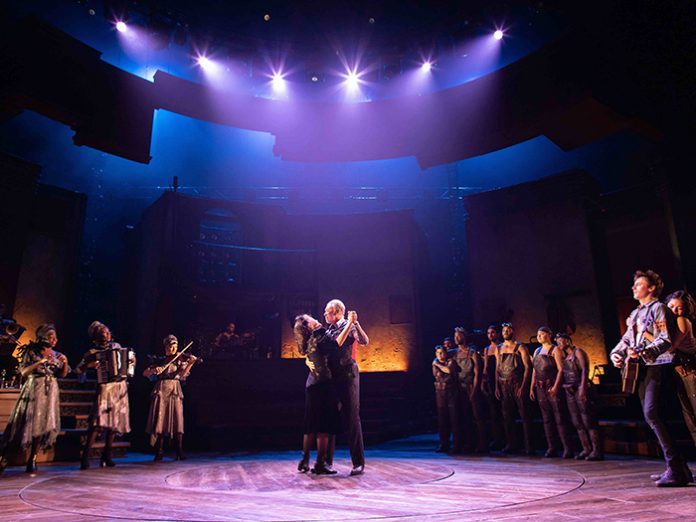 The National Theatre, situated on London’s South Bank, has been a revered national institution for over fifty years. Its three theatres, the 1110-seat Olivier, the 890-seat Lyttelton and the 400-seat Dorfman, play host to a wide range of theatre performances from bold new work to re-imagined modern classics.

The NT technical department have the responsibility to provide the best quality equipment in order to maintain the highest standards for all productions.

Robert Juliat is therefore very proud that the lighting department has invested in yet more Robert Juliat lighting equipment over the last 12 months to add to its already large inventory of RJ fixtures.

“We have over 300 Robert Juliat 600 Series 1kW and 700 Series 2.5kW profile fixtures, mostly used as generic lighting in the Olivier and Lyttelton theatres where they are rigged on the front of house bridges,” said lighting resources manager, Paul Hornsby. “The latter are especially suitable for the long throws in the Olivier and Lyttelton where they give that punchy 2.5k look that everyone wants and which has yet to be achieved by any LED equivalent.”

2018 saw Hornsby’s department make a sizeable investment in 54 award-winning Dalis 860 300W LED cyclorama battens. “Our aim was to be able to light a full wrap-around cyclorama in the Olivier, which we are able to do beautifully using 48 Dalis units (24 each on top and bottom). The cyclorama for Common, for example, measures 8m high by 21.5m wide – so you can see the size of the space they have to cover!

“We chose Dalis because we were looking for an LED solution to replace our old tungsten cyclorama lights. We compared various products and felt that in terms of size, coverage and output, Dalis was the best on the market.

“Dalis also has the advantage that it feels and looks like a traditional cyc batten. They are compact and bright so give us the throw we need for the venue, but can also be put much closer to the cyclorama cloth than other units, because they require much less space. It is a very versatile unit.”

This was not the first time Dalis 860 has appeared on stage at the National Theatre. Summer 2017 saw award-winning lighting designer, Paule Constable, employ a whole top run of Dalis 860 to great effect on the production of DC Moore’s Common.

“It’s great to have a very nice, flexible colour-change solution with very minimal power consumption,” confirms Paul. “On full output, using four coloured cells, we use only 10% of the energy that our old 500W and 1kW tungsten cyclight fixtures used, not to mention a considerable saving in gel – some shades of blue would only last for one performance! We’ve never had any complaints about the colour choices or absence of a tungsten source either – designers can find all the colours they need and the coverage is extremely nice and even.”

The Dalis fixtures are currently in use on productions in both the Lyttelton and the Olivier theatres. The Lyttelton sees lighting designer Jon Clark employing 20 units, in two rows of ten, for David Hare’s production, I’m Not Running, not as cyclorama lighting but for flood coverage on the 10m back wall of the set.

“Jon wanted an even cover at a low light level, and to be able to mix the colour to suit the set designer’s wishes,” says Lyttelton Lighting Supervisor, Laurie Clayton. “He was able to achieve this perfectly with the Dalis units, which he had previously used on the production of Absolute Hell to light up the structure of the Lyttelton stage.”

Prior to its Broadway run, Anaïs Mitchell’s musical Hadestown, is now playing in repertoire at the Olivier where LD Bradley King is using 12 Dalis 860 fixtures in an architectural fashion to uplight the back wall of the set in different colours. “The Dalis proved to be very bright and work very well, even though they are very close to the wall of the set,” confirmed Paul.

It is not just the visiting lighting designers who have been happy with the RJ Dalis fixtures. “All of our technicians here love Dalis,” continued Paul, “which are very robust with a good build- quality and have so far been problem free.”

Joining Dalis in the Olivier are three new RJ Cyrano 2.5kW HMI followspots which are now permanent fixtures in the followspot box at the back of the auditorium. “We needed to replace our old followspots with something good, reliable and bright that could cover big musical productions, like Follies, in the Olivier,” said Paul. “We chose Robert Juliat because they make excellent followspots. They are well known, which means the operators know how to use them, and they are easily available to hire should we need any more.”

Last but not least, the National Theatre also purchased sixteen new RJ Cin’k 350LF 5kW tungsten Fresnels for the Lyttelton Theatre’s basic rig where they will operate in overhead positions. “There is still no LED equivalent to a tungsten 5kW fixture and the 5kW tungsten Cin’k is in great demand by lighting designers because our venues are so big, “ said Paul, “so we are reliant on their bright sources.”

The Cin’k 350LF Fresnels supplement 16 RJ Cin’k 325LF already owned by the National Theatre in the resources hire stock, alongside 30 RJ Lutin 306 1kW units. “The little Lutins are used a lot in our new Dorfman Theatre, hired from the resources stock to supplement the basic rig,” concluded Paul. “They are ideal for fitting into the smaller space of the Dorfman.”