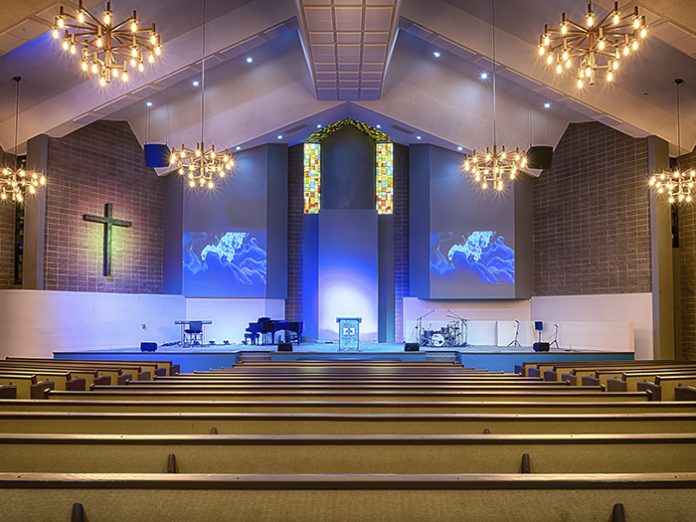 After outgrowing their long-time location in Tustin, California, Calvary Chapel Tustin (CCT) moved to nearby Santa Ana in 2015 leasing the main sanctuary from the First Church of the Nazarene. The two churches coexist on the property with CCT occupying the 700-seat main sanctuary and First Nazarene holding services in the recently remodelled chapel.

Having being spoiled by two decades in the recording studio recording and mixing Darren explained he generally only installs world-class equipment: “We typically don’t use mid-grade equipment as part of our designs. By the time we get the call from the client they are generally pretty frustrated with the level of performance of their existing sound system and are looking for final solutions. We only deal with the best equipment available from a handful of manufacturers.”

While Darren felt that the Fulcrum Acoustic loudspeakers were delivering impeccable fidelity, he felt the amplifiers he was using were leaving something on the table. He’d recently discovered Linea Research amplifiers on a chance encounter with Rik Kirby of Linea’s US distributor, Allied ProTech. “Soon after I was in the studio mixing a project and my studio amp went down,” Darren recalled. “I decided to call Rik and he furnished me with an amp to demo.”

“I was putting the final touches on a mix at that time and when I brought the faders up I was like, ‘What the heck?’ I could hear that I was over compressing the lead vocal, and my panning wasn’t accurate, among other flaws. I was now hearing the subtle nuances of the mix and picking up on problems I hadn’t noticed before.”

That led to Bowls pairing a Linea Research amplifier with Fulcrum Acoustic loudspeakers at Wildwood Calvary Chapel in early 2018. Hearing what he had heard in the studio translating into a live venue context, Darren realised he was on to something very special. In fact, BESA’s Wildwood project was the first Fulcrum / Linea Research pairing in the world.

When CCT approached BESA about needed upgrades, Darren never hesitated in specifying Fulcrum speakers and Linea Research amplifiers. “Pattern control and ultimate fidelity were the main goals in order to gain articulation and detail in a highly reverberant room. The church sanctuary at CCT was acoustically designed in the early 1970s for choir, piano, and organ,” Darren described. “It’s full of odd reflective angles and has a high peaked ceiling and a 100-foot length from stage to balcony back wall. Acoustically the room is the same today as it was when it was built.” Bowls dealt with the acoustical challenges by installing a pair of Fulcrum AH65 full-range coaxial horn loudspeakers, which have a relatively tight 60-degree horizontal beamwidth, for the main system, plus four DX896 dual 8-inch coaxial loudspeakers deployed as front fills along the stage lip, both to fill in the first few rows, and to lower the sound source back down to the stage. Three floor-stacked Sub218L dual 18-inch subwoofers deliver the extended low-end frequencies.

A system of this size requires a fair bit of firepower, which is a strength of Linea Research amplifiers. Bowls powered the bi-amplified AH65s with four channels of a Linea 48M10 and put the amp’s other four channels to work driving the DX896s. The 48M10 packs eight channels of

Class D amplification into a mere 2U of rack space, as well as carrying onboard DSP that fully supports Fulcrum’s TQ FIR processing algorithms. It can deliver 1,250 watts of RMS power per channel into a 2, 4, or 8 ohm load, or even drive that same power into a 70 or 100 volt system.

The subwoofers are powered with a Linea 44C20 amplifier housing four channels in a 2U package, each channel delivering up to 5,000 watts (at 2 ohms) of Class D amplification at extremely low distortion. The 44C20 also offers extensive 96 kHz signal processing, as well as Ethernet networking, and a variety of input options (analog, AES3, and optional Dante).

Linea’s distributor Allied ProTech provided BESA with extensive support in optimizing the system setup, and Bowls was thrilled with the results. “It’s like there’s nothing between the music source and the speaker; it’s truly transparent,” he exulted. “BESA has always focused on how a room makes a person feel while listening to music, and if done correctly, the immediacy of the music and spoken word will engage the listener from any point in the room. We certainly achieved that at CCT.”

Darren knows he will continue pairing products from these two companies together. “The combination of the Linea Research amplifiers with the Fulcrum Acoustic loudspeakers is uniquely special. Fulcrum and Linea are a perfect match.”