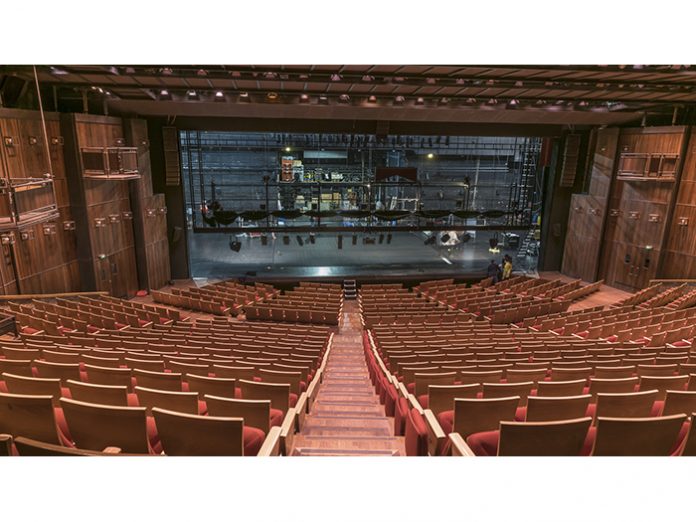 Designed with the principle of an insulated staging area, Le Grand T’s theatre distance between the stage and the last row is short. To enhance the proximity, Le Grand T upgraded the entire front-fill sound system. Sonowest, utilised APG, and its new Uniline Compact to answer the technical requirements and specifications.

“Our previous sound system was ageing and we could hear the difference of tone between the speakers. More importantly, the sound coverage we had wasn’t homogenous, which in turn created a sensation of hotspots when subjected to strong acoustic pressure.

“This manifested as a lack of coverage on the tip of the stage, thus creating a major void in the centre of the pit, as well as a pressure drop towards the last rows and therefore the control room,” Patrick Morilleau, Technical Deputy Director of Le Grand T, commented.

“The challenge with this upgrade was to obtain an even acoustic pressure for the entire audience and a more precise sound with a system capable of handling various user modes.

“Because Le Grand T mostly hosts theatrical performances, the aim was to find a solution able to preserve the stage frame while reducing the visibility of the speakers to a minimum.

“Indeed, these are usually considered by directors, choreographers, and scenographers alike as bulky elements that disrupt the artistic approach. Efficiently integrating a sustainable front-fill system was therefore essential for the audience sitting in the front rows as well as those in the following rows whose sound experience suffered from the dropping sound,” added Patrick.

Le Grand T contacted a number of loudspeaker manufacturers to assess the different options and techniques available. The first selection was carried out based on a technical brief, coupled with a cost study, highlighting four integrators with four different technical solutions.

This was followed by a four-day listening phase, allowing the pre-selected brands to demonstrate their system. These days were organised with strict framework and timing to obtain a written analysis, resulting in a fully documented comparative result.

Acoustic pressure measurements were organised each day in various spots in the theatre to get the most objective data.

“APG stood out from the crowd by providing the most even coverage, with an accurate and efficient acoustic pressure all the way to the last rows. The nearfield speakers coupled with the sub bass system was perfectly attuned, and allowed to map out a qualitative sound,” explained Patrick.

Le Grand T also specified a Uniline Compact, which uses three different acoustic modes: a ‘large bandwidth’ mode (UC206N / UC206W speakers only) for voice and musical reproduction at moderate levels, an ‘extended’ mode (UC206N / W coupled with a UC115B bass speaker or another APG subwoofer) for music applications, and a full mode (a combination of UC206N, UC206W, UC115B and APG subwoofer) for high power applications across the entire audio spectrum.

The extended modularity of the Uniline Compact system allows a large number of configurations (hung or floored) and an almost unlimited number of combinations between these three speakers, so the system can adapt to the different specificities of each venue.

A total of 14x UC206N medium / long range loudspeakers and four UC115B bass speakers are now used at Le Grand T. These are complimented with five UC206Ws for the middle configuration. Four Uniline SB118 bass speakers are also situated on the floor, ensuring the sub frequencies.

The Uniline Compact range are the only speakers that guarantee two distinct horizontal directivities: 70° for the N version and 105° for the W version. At Le Grand T, the audio kit is made of 70 ° enclosures, so that sound doesn’t ‘spill’ on the side walls, and sound reflections are minimised. The middle configuration is made of UC206W loudspeakers (105 ° opening) for efficient beams crossing.

David Rochefort, project integrator at Sonowest said: “The Uniline Compact USPs are obviously great modularity, a size/performance/quality ratio never reached before, as well as neutral and even frequency response.

“Today the French market for this type of system is governed by one or two massive players who don’t leave any room for other systems, even if they are very well manufactured and tick all the boxes for operators. It is sometimes difficult to ignore these ‘heavyweights’ in sound, as well as their marketing strategies.”

David explained the role that integrators have to play to fight this standardisation: “It can be tempting to stay in this comfort zone, and limit yourself to the current flagship system, but our role as integrators is to think about the challenges that our clients face, and be a driving force for alternative and original solutions such as the Uniline Compact.”

Sonowest recently invested in a demo kit which allows them to demonstrate that “for a generally smaller budget, the Uniline Compact is able to do as well, if not better than any other system”.

Patrick concluded: “I particularly want to thank both APG and Sonowest for their involvement: They met all our requirements, every step of the way. The relationship was friendly, constructive and discerning. As for APG, they have the refreshing behaviour of a start-up, and the experience of a long standing French company.”