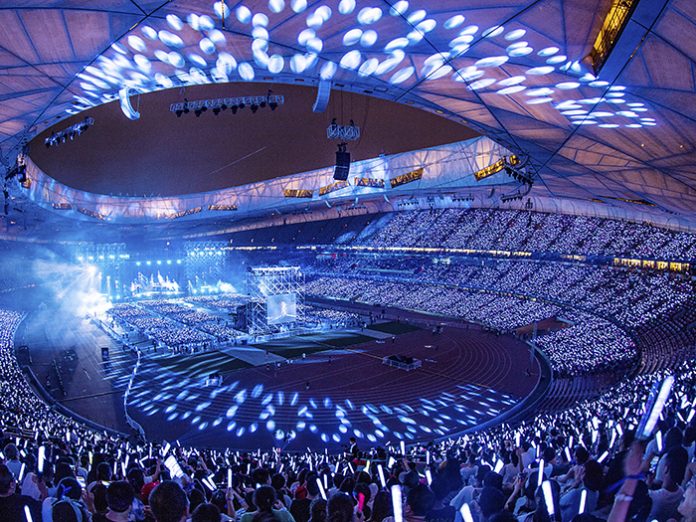 Zhang Jie (张杰), also known as Jason Zhang, is a musical phenomenon in China. He started out on the My ShowTV talent contest in 2004 and has since released 12 studio albums. His latest Future Live tour has filled stadiums across the nation, including a show at the Beijing National Stadium (Bird’s Nest) for 80,000 fans, which sold out in just over two and a half minutes and set new records for a live streamed event via Tencent with over 100 million viewers.

The Future Live show is a theatrical masterpiece, and as well winning praise for the human elements of music and dance, it has been termed a ‘comprehensive showcase of new technology’, with the incorporation of a large L-Acoustics K Series PA system as well as a huge ‘ice’ LED screen, advanced mechanical staging and lighting effects.

Mr. Zhang Jing was the Monitor Engineer for Future Live and describes the evening at the Bird’s Nest Stadium as an ‘undreamed-of success’.

“It was mind blowing,” he said. “With spectacular lighting, and an amazing sound system. Zhang Jie delivered the best performance on stage, while the L-Acoustics system delivered the ultimate sound. The coverage was excellent, which is never easy for such a large-scale production, with audiences in the tens of thousands.”

China’s Beijing National Stadium, nicknamed the Bird’s Nest Stadium due to its unique and highly recognisable architecture, includes a huge concrete inner bowl and a 45,000 tonne steel mesh roof. Measuring 330m x 220m, even with the inner acoustic membrane, the sheer size of the venue meant that coverage and control were always prime concerns for the crew.

“We definitely got the most out of the system,” said Zhang. “We achieved the full fidelity the loudspeakers are capable of, which allowed us to maximise the listening experience for the audience.

“With a well-designed solution and accurate installation, L-Acoustics gives excellent quality sound and creates a perfect atmosphere for the audiences – even in such a large venue.”