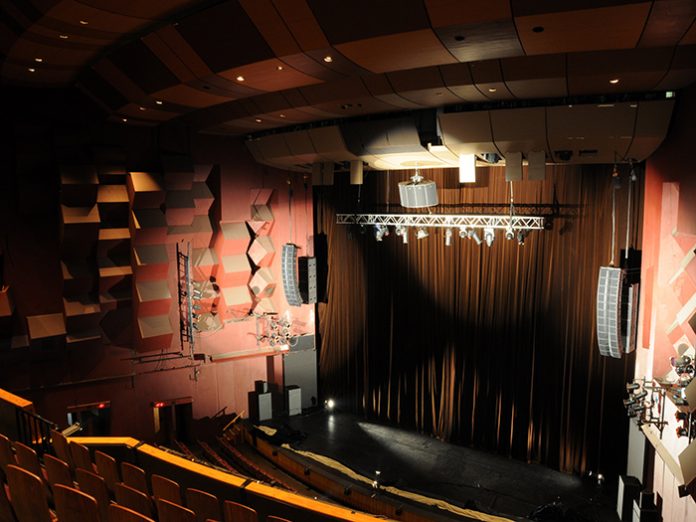 The South African State Theatre’s Opera House has recently opened its doors to new musical genres, in particular jazz, and needed a new audio system that could meet the varied demands now placed on it.

At the end of 2017, an L‑Acoustics Kara system was installed, bringing the Opera House’s audio bang up to date with a solution that can handle the diversity of productions the theatre hosts in a rider-friendly format.

Originally opened in 1981, the South African State Theatre was the major force behind establishing the performing arts in South Africa and is a national flagship. It has six theatres sited on the huge State Theatre complex in Pretoria. The Opera House is the largest of these and has always been the country’s premier opera venue, as well as hosting a wide variety of theatre productions.

The design and installation of the Opera House’s new system were performed by Richard Smith with technical support from L‑Acoustics Application Engineer Julien Laval and was commissioned by him in November 2017.

“The original brief came via a tender which had a general specification from the theatre,” said Richard. “All the major manufacturers pitched for it and we were lucky enough to be awarded the contract.”

An L‑Acoustics Kara system was specified, knowing from experience that it was the right product for space and because brand acceptability was extremely important to the theatre.

“A reputable brand was specified in the tender document and there just isn’t a brand that is more reputable and rider-friendly than L-Acoustics,” said Smith. “We’ve used Kara in a lot in theatres and churches of similar sizes, so we knew it would work and give a great result.”

“We added a centre cluster for when the theatre is being used for musical theatre and we chose ARCS II for this, based partly on the spec, but also on the size and power of the cabinets, which are optimised to deliver very high SPL levels, great low-frequency performance, and are consistent in tonal balance across the entire theatre. But the Kara can be used on their own for concerts if the guest engineer prefers,” Richard continued.

“I worked with Julien Laval on the design of the system and we decided to go with an end-fire sub configuration on the ground. By doing this and having the flown subs behind the system in cardioid configuration, we were able to keep the bass off the stage. The X-Series are to bring the image down, so the people in the front don’t have sound coming from way above their heads.”

The venue also wanted to have more control over the system and are happy with the fact that files can be logged in the event of an issue in order to pinpoint exactly what happened, for example, if there was a power surge. This offers more accountability and protectability, and ultimately peace of mind.

The first show to use the new system was Capital Singers, the biggest community choir project on the African continent. The show has an orchestra consisting of a 12-piece string section, four-piece brass section, concert grand piano, full rhythm section, and complete orchestra percussion section, but the main attraction is the 650-member choir supported by professional solo vocalists.

“The December 2017 show was the 10th project for Capital Singers,” said Stephen Kruger, Capital Singers’ FOH engineer. “There were three sold out shows and it was an absolute pleasure using the newly installed L‑Acoustics system. Having a good system in the venue with 52 open microphones—including 16 hanging mics for the choir—made my life so easy. I mix shows in the State Theatre three to five times a year. For the first time in the history of this production, and my 18 years as FOH engineer, I could focus on mixing and getting the show to sound great instead of fighting bad frequencies and dead spots in the venue.”

What impressed Kruger most about the system was the smooth coverage throughout the venue. “The centre cluster and front fills smoothly out the usual problem areas,” he added. “The time alignment of the system is spot on and I didn’t have to waste any time during load-in to get the system tuned; it was ‘plug and play’ for me. Even under the balcony, without under-balcony fills, you can hear every little detail from the two main hangs. For the first time in years, I had a proper and accurate reference at the FOH mix position in this venue.

And the headroom on the system is absolutely amazing. The combination of flown and end-fire ground stack subs made the low-frequency distribution in the venue better than ever before. The overall system is an absolute pleasure to work with and I am looking forward to my next show on this system, coming up in May.”