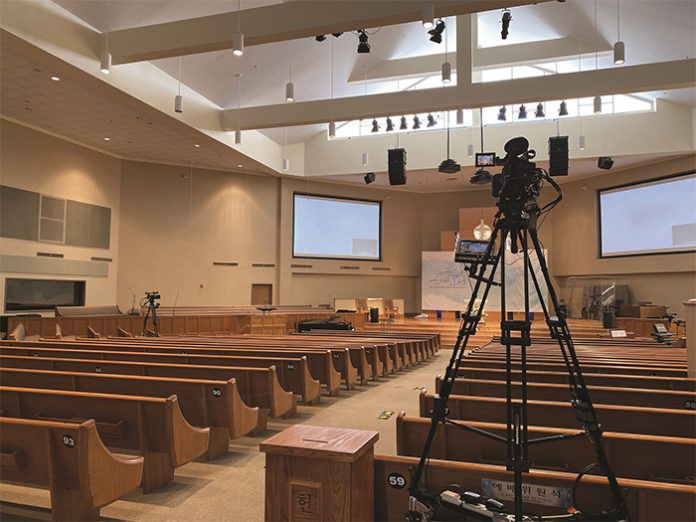 The Korean Community Presbyterian Church of Atlanta has invested in a trio of video mixers and seamless presentation switchers from Analog Way’s new Midra 4K product line to drive projection screens in the main sanctuary and Love Chapel. Genesis Technology of Chantilly, Virginia served as the integrator.

“Genesis Technology has partnered with Analog Way on many successful church projects,” notes Seth Teates, Regional Sales Manager for Analog Way. “We are excited to be a part of this new project and employ our new Midra 4K series processors. These are perfect for the house of worship market, offering full 4K 60Hz HDR scaling capability with a rich feature set and incredibly intuitive user interface, all at a very competitive price.”

“The upgrade was driven by the church wanting to improve the quality of live streaming for its services during COVID-19,” explains Michael Yoo, Senior Systems Engineer at Genesis Technology. “With the congregation now worshipping from home, everyone noticed the poor video quality of the live stream. So the church decided to invest in new switching that will solve that problem and serve them well over the next decade.”

The Pulse 4K and one of the QuickVu 4Ks have been installed in the main sanctuary where they drive a pair of IMAG projection screens with graphic lower thirds and a confidence screen for those on stage. Three Eiki projectors are used as well as four cameras (soon to be increased to seven) to capture content and four computers to feed graphics.

The second QuickVu system is in the Love Chapel, which is used by young parishioners in another building on campus. It drives a large center projection screen and confidence screen.

“Our Midra 4K products offer by far the most powerful and most cost-effective 4K switching on the market with true 4K processing,” says Teates. “The Midra 4K line is based on the scaling and processing of our flagship Aquilon series. It only began shipping in January and systems are already in more than half-a-dozen churches — a perfect fit for the house of worship market.”

The Korean Community Presbyterian Church of Atlanta employs three professional AV staff members for the main sanctuary. “Analog Way products are very easy to teach, program and operate,” reports Yoo. “It took the staff less than one hour to figure out how to operate the systems and teach other volunteers. It was a very easy transition from the old system. We spent about a day with the staff saving memories and making presets so now they can just push a button and that’s it.”

Yoo notes that the volunteers operating the QuickVu in Love Chapel were also fast learners. “Young people are very tech savvy, and they caught on quickly,” he points out.

“I can’t say enough good things about Seth and his team at Analog Way,” Yoo adds. “We were not the only contractor bidding for this project, and Analog Way was really helpful in closing the deal and supporting the installation.”

Although the Midra 4K systems were only installed a few weeks ago, Yoo says the church has received “so many compliments from people watching services online – they immediately noticed how great the quality of the live stream was, it’s the difference between night and day. Everyone is very happy.”