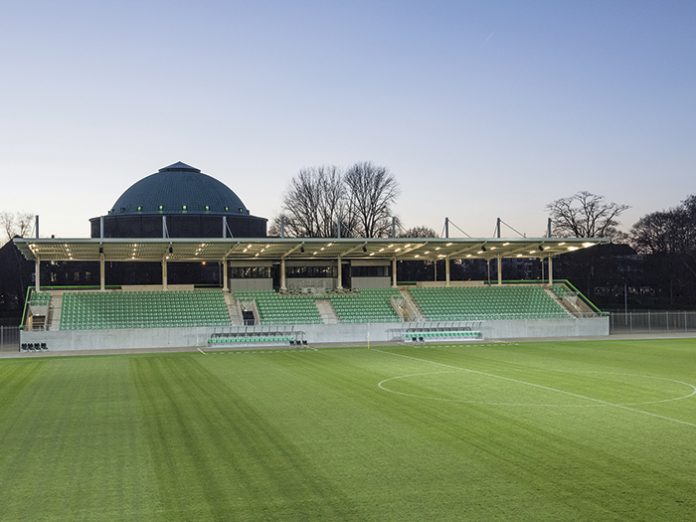 At the end of 2016, the completely redesigned youth training centre was officially opened under the name “96 – DIE AKADEMIE”. 96 president Martin Kind and Hanover’s mayor Stefan Schostok gave the go-ahead for this together. With this large-scale project, Hanover 96 is investing a total net amount of 18 million euros in the black-white-green future. The second part should now be implemented by July 2017. In addition to more seating, the former main stand of the stadium, in which the administration rooms of the youth training centre were previously located, will be completely gutted and renovated.

The sound amplification on the two new stands was also planned and implemented by Christian Martin, the technical director at Hannover 96. Six GRAVIS 12+ W units are used in each stand and are installed in the roof structure. The loudspeakers are operated with the K&F D 80:4 system amps, which are based on the four-channel amplifiers of the same name from Lab.gruppen. The difference compared with the Lab.gruppen amplifiers is that the K&F models are activated for processing the K&F library. The library contains all modules for the system equalisation of the Kling & Freitag loudspeakers. With the Lake Controller and Dante interface, the K&F system amps offer everything an amplifier needs to offer.

Over the past year and a half, a lot has happened at Eilenriede – an area covering some 130,000 sq metres in the city of Hanover. In the new administration and boarding house, in addition to eight player cabins for the teams from U10 to U17, there are various office and meeting rooms with all possibilities for video analysis and scouting. “With this new building, we have achieved the last building block to fully compete in German professional football”, said Martin Kind.