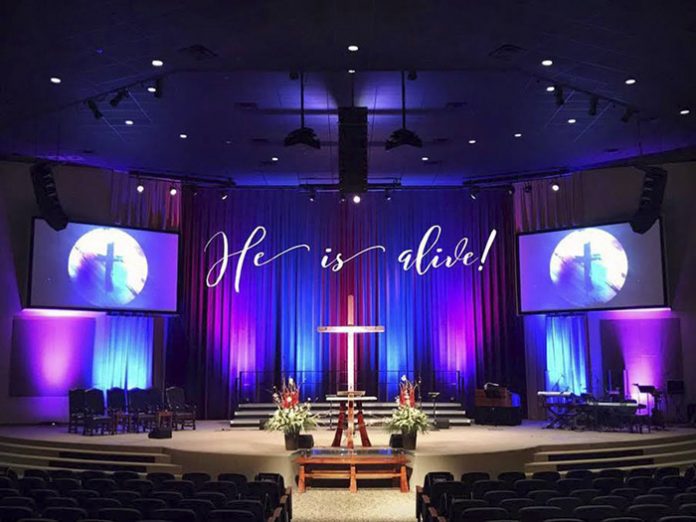 Word gets around fast: there’s a new monitoring system in town, and the New Life United Pentecostal Church in Austin, Texas has got it. “The reaction to the KLANG:fabrik 3D IEM monitoring systems we installed has been nothing short of amazing—every musician in town wants to try them out,” said Terry Golden, FOH mixer at New Life Austin.

Terry has been with the church through two previous leading-brand IEM systems. One was reliable but had the “sonic quality of a transistor radio,” Terry recalled, while the other was just an incremental improvement sonically. But when he listened to an online demo of the KLANG:fabrik 3D system, he was sold instantly. An in-church demo provided by KLANG technicians sealed the deal.

One KLANG:fabrik provides eight stereo mixes for use by the four to six musicians on stage during worship services, who use the two KLANG:quelle headphone amps connected over a single Dante-networked cable, to create their own individual mixes for each performance.

The second KLANG:fabrik unit is dedicated to the lead vocal and six backup vocalists, through two separate stereo mixes, leaving Terry more than six additional mixes for other applications, such as guest performers. “I barely have to touch monitors anymore,” he said. “The musicians can create exactly the mixes they want on their own using the KLANG:app, which is phenomenal.”

Terry was initially attracted to the KLANG:fabrik’s sonic clarity and fidelity—“What goes in is exactly what you get back,” he said—but soon realised that its ease of use was going to be a big selling point to musicians.

KLANG:technologies’ innovative 3D personal monitor mixing system is the first true breakthrough development since the introduction of in-ear monitoring—a natural and intuitive placement of sound that lets the user position sources in the mix through a 360-degree soundfield that feels authentically like a three-dimensional stage.

“You used to be limited to left, right and centre,” said Terry. “But the idea of psycho-acoustically mixing in your head the sounds that surround you is a whole new way of approaching mixing monitors. The degree of placement and separation is incredible. Put that on top of the clarity of the sound and the ease of use and it’s a truly revolutionary system. It’s changed the way we do monitors and the way I approach front of house. It’s nothing short of amazing.”

Headquartered in Aachen, Germany, KLANG:technologies is the world’s first manufacturer of truly immersive 3D in-ear monitor mixing technologies. The company’s core product, KLANG:fabrik, is a professional rack-mount monitoring mixing engine specifically designed to be used with IEMs and provides musicians with individual, natural and three-dimensional sound. KLANG:technologies’ products are now exclusively distributed in the US by Group One Ltd. of Farmingdale, NY. For more details on the manufacturer, visit www.klang.com/how.

About Group One Ltd.