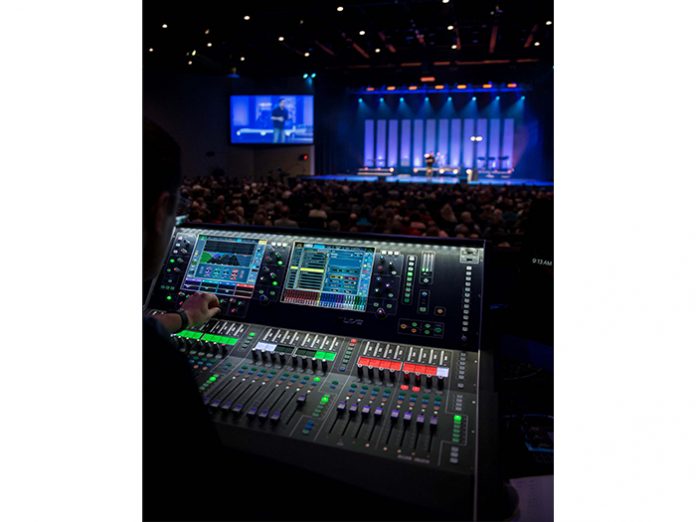 KCC campuses in Troy and Orion, MI had ageing digital mixers in need of replacement. A third campus, in Clinton, MI was in transition from a portable campus to a fixed location. The church wanted new mixers that were volunteer-friendly while being flexible and scalable enough to meet the variety of needs for the individual campuses.

Dennis Andersen, KCC’s Central Production Director explained the church’s choice of the Allen & Heath dLive, said: “Price point, flexibility and ease of use were at the top of the list for our three permanent locations. Also, the dLive consoles give us good clarity and intelligibility which is very important to the message we communicate. And, the ability to quickly manoeuvre anywhere with I/O channels and FX is great. Our volunteers enjoy mixing on the dLives.”

Advanced Lighting & Sound of Troy, MI provided the Allen & Heath equipment to KCC and designed and installed a complete PA system in the new Clinton campus. Bob Sullivan, President, described the Allen & Heath equipment, added: “We installed dLive S Class S5000 Surfaces with C Class CDM48 MixRacks at Troy and Orion and a CDM32 MixRack in the new Clinton location. Troy and Orion each have a DX168 expander for audio I/O in their video production rooms with a second DX168 on stage to handle extra I/O for the church’s large productions. Clinton has a DX168 in its video room and a pair on stage. MixRacks and Surfaces at all three locations are equipped with Dante cards and Clinton has one of the newer Allen & Heath SQ-6 digital mixers along with an ME Personal Monitor System for its multipurpose room along with a Qu-PAC for one of its larger youth rooms.”

As KCC continues to grow and expand, Sullivan commented: “The church is very pleased with the features and value the Allen & Heath systems have provided. As their other campuses make technology upgrades we see them following the same path.”