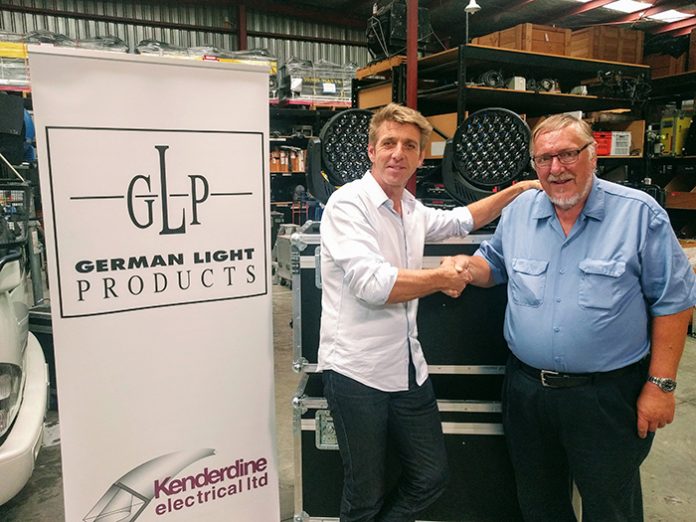 GLP has appointed Kenderdine Electrical as its distribution partner in New Zealand. With nearly 60 years of trading, the company brings vast experience and market knowledge.

Kenderdine Electrical was started in 1959 by Hugh Kenderdine, a working theatre electrician, as a hire service to the theatre industry. Over the years the company grew to be a major supplier of equipment to the theatre and rock & roll industry. By the early 80s the company was purchasing and importing equipment for its own hire stock, but more importantly, reselling to customers around New Zealand.

In 1982, Chris McKenzie joined to form Professional Lighting Services to look after the growing film and TV markets in New Zealand. McKenzie confirms that his company had been seeking a premium moving light brand to introduce to the New Zealand market. “We had been aware of GLP for a long time but at the time it was being represented by an Australian company who also had distribution for New Zealand.”

However, Kenderdine put up a strong case to take on the brand. “GLP now fits into the top end of our product portfolio to provide our professional customers with a world class brand.”

The company acknowledges that while the brand is well-known in the international touring market by local companies who service this sector, they will set out to educate other potential customers. “We have had very positive feedback from those who know the product but more especially from customers who are seeing GLP for the first time,” Chris McKenzie adds.

“In particular we have received solid local interest in the X4 Atom, X4 Bar 10 and 20 and X4 L from second-tier hire and production companies. We will also be showing the units to TV companies and Government-owned theatres who have the budget to run their own lighting stock.”

Kenderdine have certainly opened their account in the most spectacular fashion, with a hugely successful launch at Auckland Live / Aotea Centre. “We had rental companies and production companies from Auckland, Hamilton, Wellington and Christchurch attend the presentation and they were pitched with a well choreographed show,” Kenderdines’ MD continues. “After the first show we had Søren Storm run through the attributes of all the fittings and then present the show again before customers were able to check out the kit close up.”

The next step is to take the GLP range on a five-city roadshow tour of the North Island. Commented Søren Storm, “We are very pleased that Kenderdine Electric has taken on the distribution of GLP exclusively in New Zealand, as this will help gain a strong foothold in the market. Kenderdine has a long and strong history as a distributor who can represent a brand well, with a strong, dedicated team that knows the industry.

“It was also very clear at the launch of GLP in New Zealand that the brand is well known and has a really good name in the industry.”