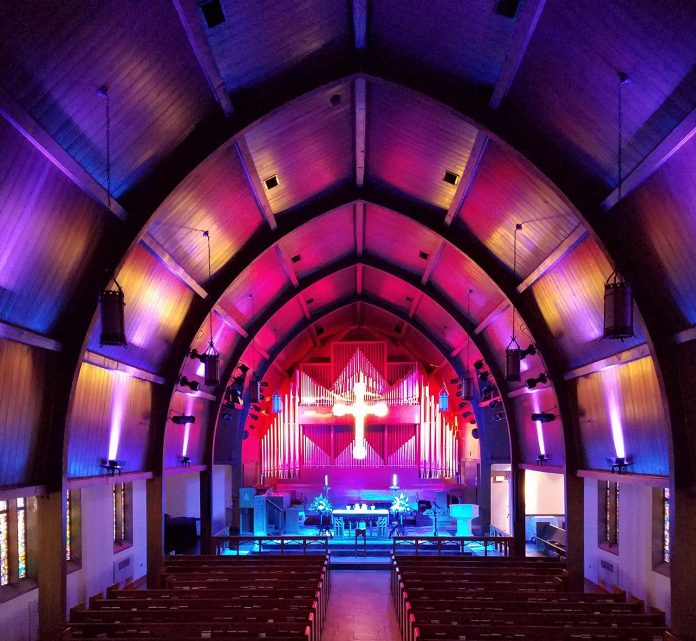 During the early days of World War II, a group of young Methodist scientists and engineers found themselves in eastern Tennessee working on a secret government project. Away from home and yearning for spiritual fulfilment during those difficult times, they gathered for services every Sunday in the town’s movie theatre, forming what would become the First United Methodist Church of Oak Ridge.

By 1958, the cornerstone was laid for their church’s first permanent building, a classic grey stone structure that stood as a testament to the enduring values of its founders. First United Methodist still makes its home in that building today, drawing strength from the tradition-rich features of its sanctuary. Preserving the original character of this area was critically important to the church’s leaders when they decided to modernise their lighting system. They were able to achieve this upgrade, without sacrificing tradition, thanks to a design by Ken Patterson that featured a collection of CHAUVET Professional LED fixtures.

“This is a timeless and very attractive sanctuary,” said Ken, owner of A Tennessee Lighting Company in Knoxville. “Everything about the building is beautiful but the old lighting system was from the 1960s.”

Ken’s new lighting not only preserved the classical aesthetics of the sanctuary with its long narrow nave, stained glass windows and high wood-ribbed vaulted ceiling, it accented many of the room’s architectural elements. A case in point is the massive pipe organ located at the back of the stage which Ken highlights with Rogue R2 Wash fixtures. “The church really wanted to light the pastor and highlight the large pipe organ,” he said. “We use the Rogues for this accenting. The Rogues are also used to highlight the different performers during worship music recitals. A really good thing about the Rogues in this application is their ability to refocus for multiple positions which greatly increases the versatility of our lighting.”

“Installing the new LED fixtures opened unlimited lighting opportunities for the church within the overall architectural design of the sanctuary,” said Ken. “Our overriding goal was to keep the new lighting unobtrusive. This was very important to the church. They wanted the look to flow with the architecture. So we mounted all the lights on pipes, painted them to match the wood walls and kept everything at lowest profile possible.”

Although they blend in unobtrusively with their surroundings, the new fixtures have made a significant impact on the overall environment in the church with their rich colour rendering and smooth even fields of light. “The zoom function of the fixtures results in an absolutely perfect blending of colours,” said Ken. “A typical Sunday morning service will not likely see the deep saturated colours that are possible with these fixtures but the church has already used the full spectrum of colours available for many different functions. The good smooth white for cameras, along with the colour temperature macros makes our lighting well suited for lighting video services as well.”

Ken’s lighting also accents the architectural balance of the sanctuary, thanks in part to the COLORado fixtures he mounted on the laminated wood beams on either side of the nave. Positioned 24-feet above the floor, these fixtures are used for down washing.  “The zoom function on the COLORados makes it easy to move from a general wash look to a very narrow special,” he said. “The zooming, plus the smooth dimming, has made them invaluable.”

Another key factor in the lighting upgrade are the two Ovation E-260WW ellipsoidals in Patterson’s rig. The two Ovation units are used specifically to illuminate the large cross over the stage.  One of the powerful ellipsoidals is shuttered vertically and the other horizontally to match the shape of the cross. “The high-definition lenses of the Ovations provide us with precise coverage on the cross, with absolutely no spillage beyond it,” reiterated Ken.

As part of its lighting modernisation plan, the church also had Ken install new fixtures in an area of its building devoted to contemporary services. He used a collection of 30 LED units in this section, creating a rig that can move from supporting services with rich backdrop washes to generating dynamic rock show looks. The fixtures he used include four Rogue R2 Washes, four COLORado 1-Quad Zooms, four COLORado 2-Quad Zooms from CHAUVET Professional, and four SlimPAR Q12 USBs from CHAUVET DJ. Patterson also designed a scenic element for the room with LED tape.

Looking over the net result of his two designs, Ken finds it extremely gratifying that his lighting has enriched worship services at First United Methodist while preserving and even enhancing the main sanctuary’s original design. “While the church would probably be considered conservative, the members have been excited and emotionally moved by the incredible colours created for both traditional and contemporary services,” he said. “The lighting strikes an emotional chord with many of the church’s members, and Jeff Kile, the lead tech, has been very creative in using the lights. This is the final ingredient for a great system, one that has made us all very proud.”