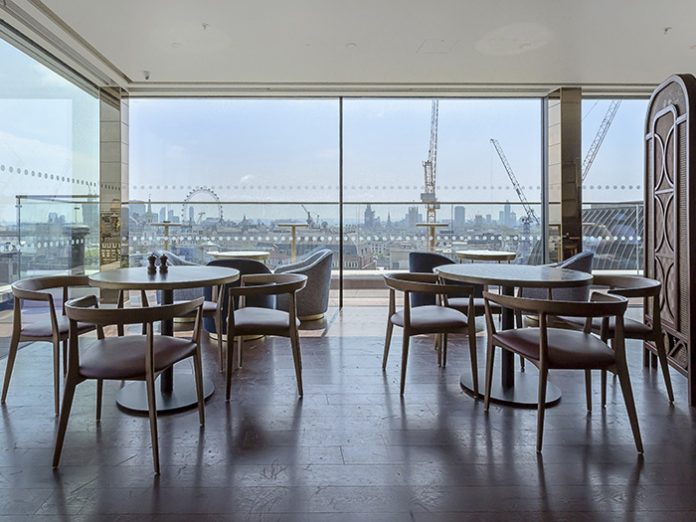 With the prestigious address of number one Leicester Square, the building formerly known as the super-club Home has been reinvented as Hotel Indigo – 1 Leicester Square, one of the British capital’s most exclusive destinations. Offering unbeatable views over the city from its top floor bar, the hotel can also boast of an equally impressive K-array audio system, supplied and installed by leading systems integrator AT&C Professional Systems Ltd.

Standing nine storeys high and the result of a four year project, the recently opened Hotel Indigo – 1 Leicester Square is rapidly attracting a reputation as a unique, characterful venue for high society gatherings. Awaiting guests at the top of a short elevator ride is the restaurant bar which crowns the building. Inside, floor-to-ceiling windows and an abundance of mirrors create a sophisticated atmosphere while offering breath-taking views. But the décor created acoustic challenges for AT&C Project Manager Ian Dunn, as he worked to deliver the ‘adaptable and extremely discreet’ high-end audio system requested by the hotel’s owner, Criterion.

“The original specifications were quite traditional, with big black speaker enclosures. But they wouldn’t have provided the proper coverage and they would have been far too intrusive – we would have had to recess them into the ceiling,” he explained. “Instead we chose a K-array solution which is much better. It’s a practical high-end system that complements the interior design whilst still packing a punch.”

Working with the exclusive UK distributor for K-array, 2B Heard, AT&C developed a solution to cover three distinct zones. “The private dining room required a background music system that could function independently of the rest, while the audio within the bar needed to be capable of handling everything from BGM through to a live DJ,” Ian explained. “The restaurant needed a more ambient sound, so as not to disturb diners. Hence the need for three separate zones.”

The private dining area consists of two Tornado KT2W mounted opposite one another with a Rumble KU210 subwoofer discreetly positioned beneath one of the sofas to “give a lovely warm sound”. The restaurant hides two Rumble KU210 subs, again tucked away beneath seating, while a further six Tornado KT2Cs are installed out-of-view within the ceiling to provide seamless coverage. “The fact the Tornados are in the ceiling creates an even but unobtrusive sound, which is ideal for this area,” said Ian. “In fact, very few people realise the speakers are there.”

The central bar area houses a higher power system, at the heart of which are two Kobra KK52 compact line array columns. Both have been custom-painted in a specially ordered RAL shade of white, and are suspended from the ceiling by custom brackets.

“One of the biggest challenges we faced is that this area is effectively a big glass box,” continued Ian. “We needed to angle the speakers inwards because of the reflections so we were going to mount the speakers on the pillars just in front of the glass walls. However, during the design phase this option was eliminated due to mirrored tiles being placed on the pillars! We had to think outside of the box so we decided to suspend the Kobra KK52s from the ceiling, still positioned in front of the pillars so as not to detract from the view.”

Crucially, the tight directivity of the KK52s meant that the reflective surfaces could be avoided whilst the system still delivered the required power – no matter how near or far a guest happens to be. “The beauty of the Kobra KK52s is that they’re line-arrays,” Ian reasoned. “You don’t experience any harsh SPL difference when you’re standing right next to the column compared to when you’re 10 or 20 feet away. It’s so clever for such a small speaker, and it’s perfect for creating an audio system where the speakers are hidden away but they can still thump when you need them to.”

Another pair of Tornado KT2Cs provide coverage near the entrance, while low-end extension within the bar area is handled by a Thunder KMT12P subwoofer, housed unobtrusively within the stainless-steel bar itself.

Ian is quick to praise the now completed system and his experience of working with 2B Heard. “We worked with Sam and Dave from 2B Heard from the beginning of the project, with the initial design, and also on previous projects,” he says. “They work tirelessly and are always on the phone when I have a query or problem. We have some other projects coming up in the future that are also using K-array through 2B Heard – they are a great solution.”

He concluded: “The client appreciates what this system can do and this is one of the AV installs that we are the happiest with.”