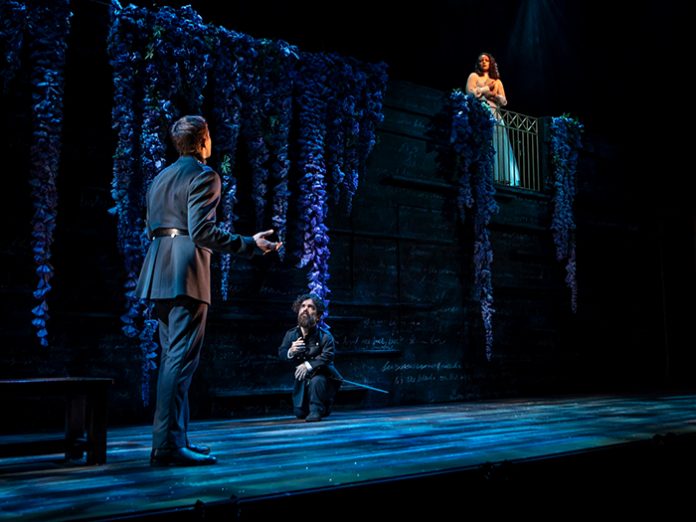 The classic tale of unrequited love premiered in November and has received praise for its design.

Separated into five acts, Jeff said he uses the Artiste series fixtures to fulfil a different role in every scene of the play. “Their versatility was key and that’s what made these the perfect light for Cyrano,” the designer stated. “It’s my first time using them and they’ve worked perfectly.”

Jeff, who has over 25 years of Broadway and off-Broadway lighting experience to his credit, uses the Van Gogh fixtures from an upstage position as the backlight system, forgoing conventional or fixed position LED backlight. “There aren’t a lot of moving lights in the plot so I wanted something with the flexibility to be able to move around to use either as wash lights to cover the whole stage or to pinpoint certain moments and as specials. They move subtlety and either expand or contract the space.”

The theatrical-grade Artiste Van Gogh houses a high-CRI, 380W white LED engine for a high-quality, flat-field light and includes a four-blade framing system. It also comes with interchangeable PC or fresnel lens options. The designer says he knew he wanted an LED wash light but it was important to him that the fixture didn’t have a pixelated LED diode face. “Cyrano is a period piece and not a rock show so I didn’t want to call too much attention to the face of the light. But, all of the lights were exposed so the appearance was important to consider,” he said. “We used the Fresnel lens because it was essential to me that it looks like a theatre light, like a Fresnel. The Van Gogh was just perfect. I’ve never quite seen anything like it.”

Although the show has a naturalistic colour quality to it, Croiter uses a full range of shades across the two-hour play from warm incandescent naturalistic hues to colours that are a bit more vibrant. “I like the quality of light and how it mixes colour,” he said of the fixture’s 16-bit CMY colour-mixing system with seamless CTO and added colour wheel. “What some of the LED lights cannot do are subtle hues and naturalistic colours from incandescent quality to sunlight/moonlight. What I love about these lights is that they were able to do that.”

Cyrano plays out on a set that is essentially a long rectangle, approximately 40ft wide but shallow at only 12ft deep, a space that necessitated the designer to employ the Van Gogh’s framing shutters. “The lights covered very well, more than enough, so we often had to do both upstage and downstage shutters to frame the light. We wanted the width but framed the light out of the audience and off the set. It was nice to be able to shape the light with the Van Goghs.”

The Van Gogh units are used anywhere from mimicking work lights, daylight through a window, and moonlight through trees to music and dance scenes. In

Act four’s pre-battle scene their multi-functionality shines. “Here they are used all over from specials to dress the scene in a cold, slightly blue austere hue to specials in a dance sequence to pinpoint moments that we wanted to pull out of the scene,” Jeff explained. “They expand and contract from full stage backlight and then zoom small to do a special on someone fighting or dying.” In the play’s final act, a churchyard scene, the fixtures create the amber and gold of a fall sunset.

In a testament to advances made in the acoustics of automated luminaires for theatre, the designer says he had no issues with noise and adds that not a single person said the rig was too noisy. “It was one of the quietest lighting plots I’ve ever put up so also in that respect it was immensely successful.”