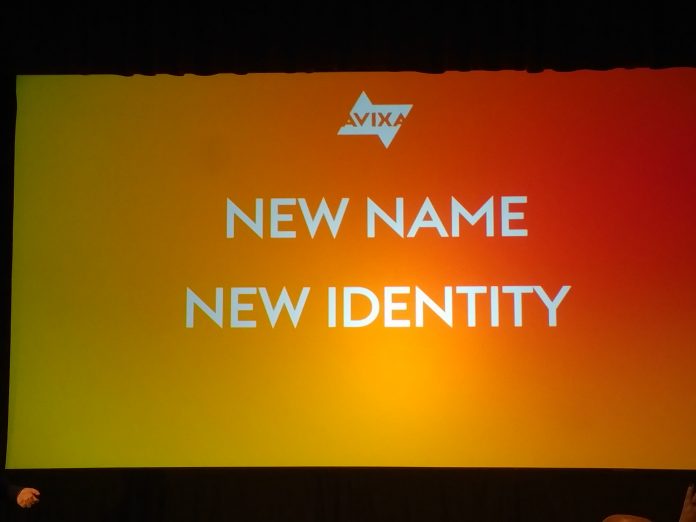 InfoComm International®, the trade association representing the $178 billion commercial audiovisual industry worldwide, has announced that they have changed its name to the Audiovisual and Integrated Experience Association™ (AVIXA™). The change reflects AVIXA’s broadening mission to be an industry hub, while also acting as a catalyst for market growth beyond what has been considered traditionally as professional AV.
AVIXA’s trade shows worldwide, including the North America show, June 2-8 in Las Vegas, will continue to operate under the InfoComm name.

“This is an exciting time for our industry and for the advancement of audiovisual solutions across a wide range of customer experiences,” said David Labuskes, CTS®, CAE, RCDD, Executive Director and CEO of AVIXA. “Thanks to the innovative, creative efforts of so many members, partners, and their customers, we have collectively grown far beyond what InfoComm International could do to promote AV around the world. AV experiences have become so ubiquitous, and they’ve come to include so many more technologies, and touch so many more personal and professional lives, that we felt compelled to embrace a new identity that more accurately reflects this industry’s excitement and welcomes a far more diverse community of professionals.”

In recent years, AVIXA’s members have evolved to offer much more than audiovisual products and systems. Their innovation and attention to customer requirements has led to an industry of solution providers that use audiovisual technology to create outcomes. AVIXA membership has grown to include experiential designers, content creators, IT companies, and users of AV solutions across a growing cross section of markets. AVIXA’s 2017 InfoComm show in Orlando last June attracted a greater share of AV customers than in any other year.

By adopting the name AVIXA, the industry association, which operates as a trade organization representing companies and a professional society representing individuals, aims to reflect both what its members do (AV) and what they create for customers, which are integrated experiences (IX).

“The AVIXA Board of Directors has set out an ambitious plan to grow the association, increase awareness of AV experiences, and reinvent our brand in order to propel this industry into the future,” said Gary Hall, CTS-D, CTS-I, President of the AVIXA Board, and Federal Strategy, Planning and Operations Leader at Cisco Systems. “With new and different people and technologies coming into this space, we are thrilled that AVIXA will be home to all of them.”

“Organizations evolve,” said Labuskes. “AVIXA’s core programs remains the same—training, certification, standards, community, market intelligence, tradeshows—but the industry has changed in exciting ways, and the opportunity to grow the market for audiovisual experience is so vast, it was important that the AV industry’s leading association change with it.”

About AVIXA
AVIXA™ is the Audiovisual and Integrated Experience Association™, producer of InfoComm tradeshows around the world, co-owner of Integrated Systems Europe, and the international trade association representing the audiovisual industry. Established in 1939, AVIXA has more than 5,400 members, including manufacturers, systems integrators, dealers and distributors, consultants, programmers, live events companies, technology managers, content producers, and multimedia professionals from more than 80 countries. AVIXA members create integrated AV experiences that deliver outcomes for end users. AVIXA is a hub for professional collaboration, information, and community, and the leading resource for AV standards, certification, training, market intelligence and thought leadership. Additional information is available at avixa.org.