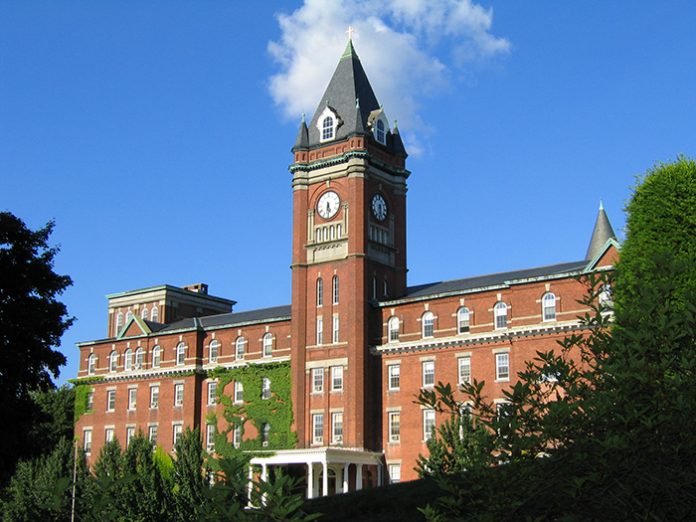 Founded in 1843 by the Society of Jesus (Jesuits), the College of the Holy Cross is ranked among the leading four-year liberal arts colleges and offers one of the most beautiful urban college campuses in the U.S. Its Henry M. Hogan Campus Centre offers a wide variety of services and facilities, including a multipurpose ballroom.

“The ballroom serves a variety of functions, hosting conferences, dinners, lectures, meetings, and dances,” remarked Holy Cross A-V Services Director Jesse Anderson. “We even have a tremendous disco ball in the ceiling.”

Designing a sound system for the ballroom required careful consideration. “Architecturally, it’s a tough space because it has a hardwood floor and one wall has enormous floor-to-ceiling windows,” observed Jesse. “The room is not huge but speech intelligibility was a major issue. We also wanted something that could reinforce music for events that are not specifically concerts.”

The A-V Services staff have been fans of Renkus-Heinz Iconyx digitally steerable line arrays since installing Iconyx IC24-R-II line arrays in the school’s chapel. “The chapel is an even tougher space acoustically because it’s all stone,” Jesse noted. “In the chapel, other than occasional musical programs, the loudspeakers are primarily used for speech reinforcement, and the Iconyx system did a great job with that. Since speech intelligibility was a major consideration in the ballroom, we knew Iconyx would be the right solution there, as well.”

Another factor was visibility-or rather, invisibility. “Renkus-Heinz was able to give us the exact colour we needed so that the Iconyx loudspeakers disappear into the background of the ballroom,” Jesse confirmed. “They are heard but not seen. That was a key deciding factor for us.”

Initially, Jesse’s team installed a pair of Iconyx IC8-R-IIs in the ballroom. “We installed the IC8s just before John Kerry became Secretary of State,” Jesse recalled. “We used them when we hosted him in the ballroom on his farewell tour through Massachusetts, and we loved them.”

The smallest of the Iconyx line, the IC8-R-II features eight four-inch coaxial transducers, each with three high-frequency tweeters. Its frequency response ranges from 120 Hz to 18 kHz, and it can deliver up to 96 dB SPL. As with all Iconyx loudspeakers, its digitally steerable beams ensure that sound is delivered directly to the audience, with minimal reflections off the floor, ceiling, and walls.

As much as they liked the IC8-R-II, however, the Holy Cross team decided to upgrade to a beefier model. “In the process of redoing the room, we decided we wanted more SPL for fuller coverage,” explained Jesse. “We reviewed a number of loudspeaker options and chose Renkus-Heinz Iconyx IC16-R-IIs.”

The IC16-R-II ups the ante to 16 of the same coaxial transducers found in the IC8-R-II. Its frequency response is the same as the smaller model but it delivers up to 99 dB SPL, with better overall coverage. “In addition to the increased power and coverage, the IC16-R-IIs gave us improved low-frequency control for music,” Jesse added.

Jesse commented that typically, the stage is the focus of the ballroom unless the room is completely unfocused, as with a trade show or a dinner event. Therefore, he said: “the speakers are located to either side of the stage proscenium and are used directionally from there. We also have adjoining spaces with their own sound systems.”

To provide user-friendly, hands-off operation, all mics and other audio inputs go directly to a Biamp Tesira-series DSP, where they are auto-mixed. The mix is routed straight to the loudspeakers.

The new system has proven a complete success. “We’re very happy with our Iconyx systems, both in the chapel and in the ballroom,” emphasised Jesse. “Renkus-Heinz delivered on all counts: overall sound quality, control, intelligibility, musicality, reliability, and invisibility. We checked out quality speakers from several manufacturers, and we’re glad we chose Renkus-Heinz Iconyx.”
www.renkus-heinz.com