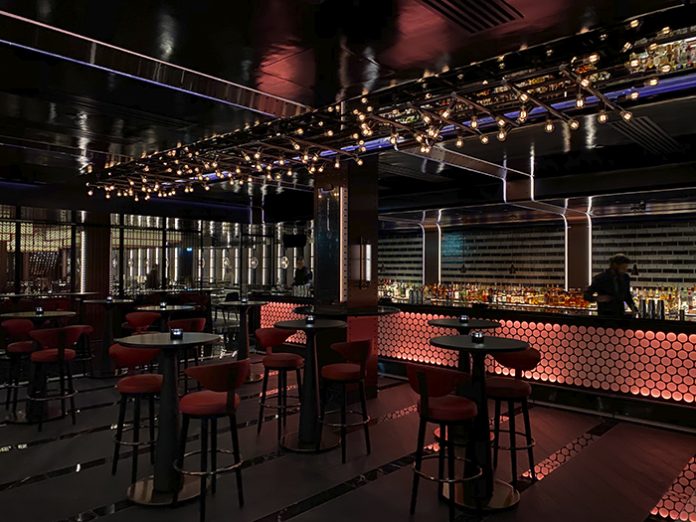 Boasting one of London’s most iconic settings—on the top floor of the former Dickins & Jones department store at Oxford Circus—Aqua is a combination of the Japanese Aqua Kyoto sushi restaurant and Aqua Nueva contemporary Spanish restaurant. Set on a vast 17,000 sq. ft space, it also includes a large central bar and balcony/terrace bar.

Opened more than a decade ago by Hong Kong-based Aqua Restaurant Group, it recently underwent a design metamorphosis, which included an upgraded Martin Audio sound system, while still retaining its distinct nightclub flavour.

Having carried out maintenance work there previously, Evolve Install, in the shape of partners Elliot Patterson and Robert Stemson, were alerted to the imminent refurbishment. They began talks with the management last April / May, budgets were discussed, and the decision was taken to keep the sound system under the Martin Audio umbrella.

“While the Under Balcony speakers were fine, and still worked well, the client wanted a fresher look and more modern speaker,” he said. “The venue also had two AQ210 [subwoofers] originally, but one disappeared because of positioning problems, and the remaining one was never sufficient for the size of the room.”

With the redistribution of the space—and removal of the sushi workstation—Elliot’s team had the chance to be creative.

They also focused heavily on the terrace area with the aim of uprating the sound system outside for a deep and warm sound. This was delivered by specifying four CDD6-WR (weatherised) speakers outside, bolted onto a beam, with an SX210 (2 by 10”) sub placed in the corner.

In the Kyoto bar area Evolve specified four of the more powerful CDD10, fixed to the ceiling, along with a pair of CSX212 (2 by 12”) subs.

While most of the back-end control and zoners remain the same the amplifiers have been upgraded, while 8-Track Music continues to curate and supply the music playlists, based on customer profiling.

Explaining the rationale, Elliot said, “While both spaces have their own independent players, we have linked the two rooms together so you can switch between sources. Music throughout is generally background but we have also provided DJ input points both inside and out.

“It’s a complete new look for Aqua and during the evening in particular, the sound really comes alive.”