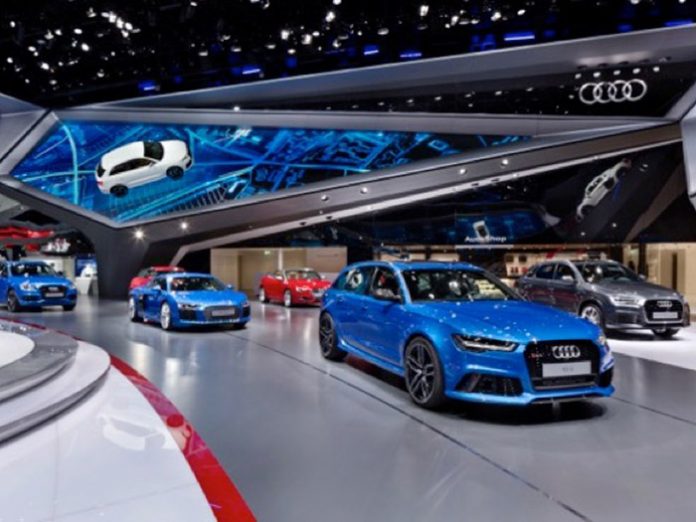 The first deployment of Wings Engine Raw, the world’s first uncompressed triple-stream 4K media server from AV Stumpfl, has broken all records for presentation and display.

The LED screens produced a total of 36,000 horizontal pixels in uncompressed format, something that couldn’t be achieved using conventional compressed video formats. The largest screen used a single-stream of uncompressed video at 12,240 x 1,907 pixels and the smallest screen produced an unprecedented 7,208 x 2,312 pixels. As each screen was unique in shape and size, special customised mechanical substructures were developed, manufactured and integrated by Matrix Management.

Held from 15-27 September 2015 at Frankfurt am Main, Germany, the IAA International Motor Show is one of the biggest auto shows in the world, and is known for revealing new and concept cars first.

“The stakes were high,” explained Georg Rössler, founder and CEO of Matrix Management. “Our client wanted us to create a dynamic presentation that would work with floor space, lighting, mirrors, elaborate set design and over 33 automobiles. Digital technologies needed to link virtual and physical exhibits and importantly to impress industry peers, visitors, and them media.

“Replacing a conventional booth, a stand-alone brand space and multimedia experience invited visitors to discover Audi’s four major themes – Sport, Quattro, Ultra and Technologies – and to reveal the future of the A4 model line and Audi Q7 e tron hybrid.”

Multisensory life in the fast lane
The starting point of Audi’s architectural and multimedia masterpiece was the 100-metres experience walk, an entrance corridor encircling the buildings interior. AV Stumpfl Wings Engine Raw was used as playout system including a presentation window using augmented reality to connect digital information about Audi technologies with the physical automobiles on display.

Sporty, sleek and powerful
A focal point was the new Audi A4 – Audi’s best selling model – which was centrally positioned on a rotating platform and surrounded by the main LED video screens. Above the main centre stage, a giant virtual compass was installed. Matrix Management programmed and controlled all movements on stage including the compass and screen content. Additionally, frame accurate control of the system was used on real automobiles that were mounted onto the surface of the LED screens.

As soon as the compass turned into one of the four cardinal directions, the entire media display of the exhibit switched between the four thematic worlds of Audi Sport, Quattro, Ultra and Technologies.

All uncompressed animated and computer graphic visualisations and scenic content was created in native 4K TIFF format by long-term partners of Audi AG.

Georg explained: “We used uncompressed media because it gives the best possible definition and quality – an essential requirement for this project. Wings Engine Raw provided multiple playback of .tiff picture sequences in addition with the playback of .png sequences from one single server.

“Wings Engine Raw is the most powerful server for uncompressed playback in the world and we are delighted to have used it the first-time on such an important and challenging project like IAA Frankfurt.”

The project was six months in the planning, eight weeks in construction, programming and testing, 13 show days and took 72 hours to remove after the event concluded.

Horst Damoser, Business Development Manager at AV Stumpfl added: “Our research and development teams have worked tirelessly over the past few years to create a single, robust system that can handle an unprecedented quantity of uncompressed 4K50/60 media streams. We’re delighted that Matrix Management has put it to the test in such an integral way.”

Further validation came after the show as Audi won best booth at The IAA International Motor Show. Now that the project is over, Matrix Management has invested in more Wings Engine Raw systems for use on future projects. Next show on stage will be in the US at Detroit Motorshow in January 2016 which will see Matrix Management GmbH again deploy Wings Engine Raw for Audi.