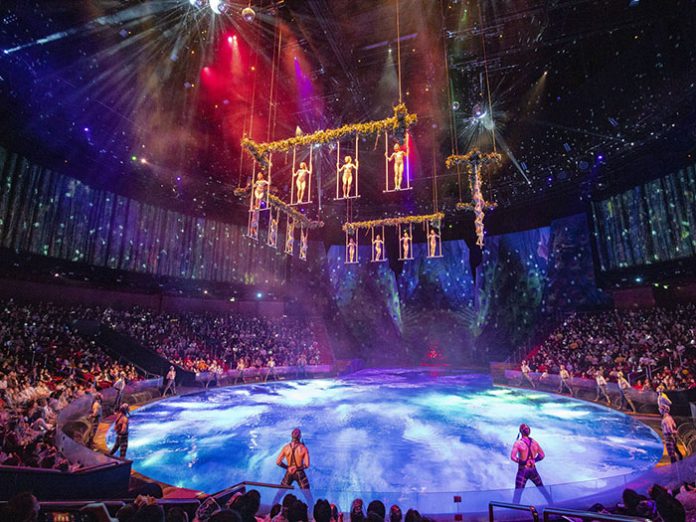 The 41 x BMFL Wash XFs and 21 x Tarrantula LED wash beam lighting fixtures have now been installed in the theatre as part of a drive to upgrade the technical equipment to include more sustainable and advanced options than were available when the show launched in 2010.

The integrity, drama and dynamics of Luc Lafortune’s original lighting design are all preserved as the concept works beautifully and timelessly to support the show narrative.

The House of Dancing Water (THODW) show is one of the most successful entertainment phenomena in the world – having clocked up over 3,500 performances, it has been enjoyed by over three million spectators who have been enthralled by this incredible work of aquatic art – the first original water-based theatre show ever launched in Asia.

Head of lighting, projections and special effects for the theatre and show is Karl Jenkins. He’s been in the post for two and a half years where he runs a team of 26 technicians and has previously worked on several ambitious Cirque du Soleil projects. Karl was instrumental in the Robe fixtures being added to the show.

They needed a strong and robust wash moving light to replace the previous ones, and the BMFL Wash XF was selected after Karl and his team spent considerable time looking at all the currently available possibilities.

“Ultimately it was the output, the colour mixing and the beautiful fresnel lens that put the BMFL on top,” he confirmed.

They didn’t need a multi-purpose unit, but they wanted that rich and deep fresnel look coupled with a high output to deal with the long throw distance, with refined and elegant colour mixing.

The final decision was taken by Karl and his head console operator/programmer Justin F Sinclair, who has been with the show since the beginning.

The BMFLs are all positioned in the overhead grid on levels five and six, at between 18 and 25 metres above the stage.

The Tarrantulas are enclosed in a series of Plexiglas ‘lighting bubbles’ below the water’s surface, and are used to highlight the underwater environment, working in unison with the special FX including ‘boiling’ and other effects created by microbubbles in the water.

Karl and the team specifically wanted an LED wash luminaire for this task.

They conducted a shootout with other products, and “the Tarrantula blew us away with its power and versatility”.

While LED was a major consideration for Karl in deciding on these fixtures for its reduced environmental impact, low heat emission was also a practical factor due to their location in the very confined ‘bubble’ enclosures.

With over 1000 fixtures in total in the show – including several submersible IP 67 and 68 ones, Robe is now also an integral and important part of this landmark production.

The whole lighting system is run via a grandMA2 network with a Luminex backbone, which is another recent upgrade.

In addition to choosing the right fixtures for the job, Karl states that the after-sales service and support from a manufacturer is paramount in the equation for a long running and high-profile show like this. “Robe has brought an impressive amount of dedication to the table before, during and after the purchase. The training and follow-up from both Robe directly and their local distributor, ArcSource Ltd has been fantastic!”