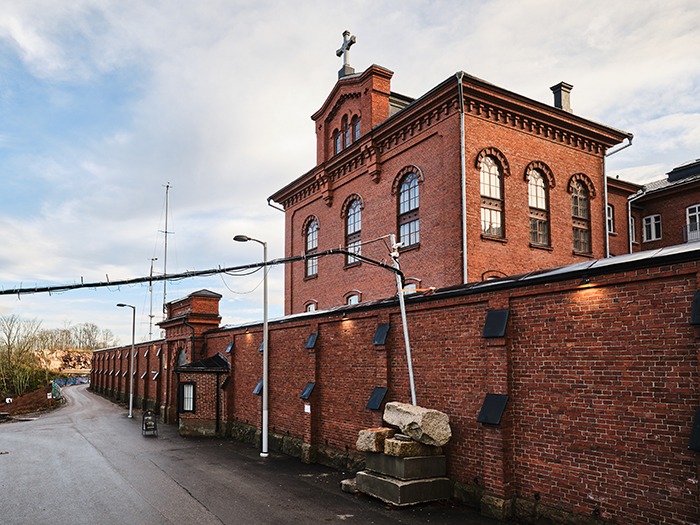 Despite its origins, visitors won’t be led in handcuffed or thrown into a bare cell, but much of the archetypal prison has been preserved, with bars still in place in some of the windows and the long corridors decorated with the prisons former iron gates. As well as this, guests will find handcuffs adorning the lobby and napkins and bedside tables in rooms created by some of the original Saramäki prisoners.

Kakola Prison opened in central Turku in the 1840s and over the years was home to some of Finland’s most notorious criminals. These included bank robber Volvo Markkanen, who received his name as he used Volvo cars as his getaway vehicles, and Toivo Koljonen, who was the last person in Finland to be sentenced to death. All of these contributed to giving Kakola quite the grisly reputation. The prison closed down in 2007 and tours began soon after, with many flocking to the abandoned building to get a sense of what life was like for the prisoners inside the walls. Now, the new 155 room hotel boasts the unique history of the prison, with guests able to stay in the former solitary confinement cells and hold events, including weddings, in the prison chapel.

Finland-based audio integrator, Hifistudio Esitystekniikka, was tasked with bringing the hotel’s sound system to life and adding a modern touch to the old public address system that would’ve once been used back in the 1800s. “The owners wanted to have a sound system complete with Finnish craftsmanship products that were high-quality and expertly designed, combined with ease-of-use. We worked with the customer, advising them on the best possible solutions to meet their needs, and, in the end, we went with a system comprising of Genelec, Bose, Symetrix and Crestron,” said Antti Vuorilahti, Co-Owner of Hifistudio Esitystekniikka.

The owners of Hotel Kakola wanted a functional system that utilised the buildings original structure to discreetly store all of the cabling and audiovisual equipment. Together with the hotel’s electricity designer, Antti and his team made a plan for the system that stretched through the corridors and rooms of the hotel. Antti explained: “The audio configuration in Hotel Kakola consists of Genelec active loudspeakers together with Symetrix DSP processors. This gives us the ability to control specific zones (rooms, lobby, prison chapel) throughout the hotel. The whole system is simple enough for the staff to use, and the Genelec loudspeakers are great looking with the best sound for creating atmospheric background music for the different areas of Hotel Kakola.

“Genelec is the leading Finnish manufacturer of active loudspeakers and is well known for its premium quality and sound, too. The owners wanted to add a Finnish element to the sound system, as this is already echoed throughout the hotel, with most of the breakfast produce primarily coming from local suppliers. So, it was a no-brainer to go with Genelec.”

The processing products that met the needs of Hotel Kakola comprised of five Symetrix Prism 8×8 audio processors. “Symetrix supplies high-quality products that are easy to use and easy to configurate, which again, was high on the team’s agenda, as it had to be easy enough for the hotel staff to use day-to-day,” furthered Antti.

One of Hotel Kakola’s real gems is the Prison Church, which has kept the original structure and layout that would have been used by the inmates. This room can be hired out by the public for events, so Hifistudio Esitystekniikka selected Bose products, including Bose amplifiers, to create the best synergy for this part of the building that will be frequently used for larger crowds, sometimes requiring much higher playback levels.

Read the full article in mondo*dr issue 31.2 below –