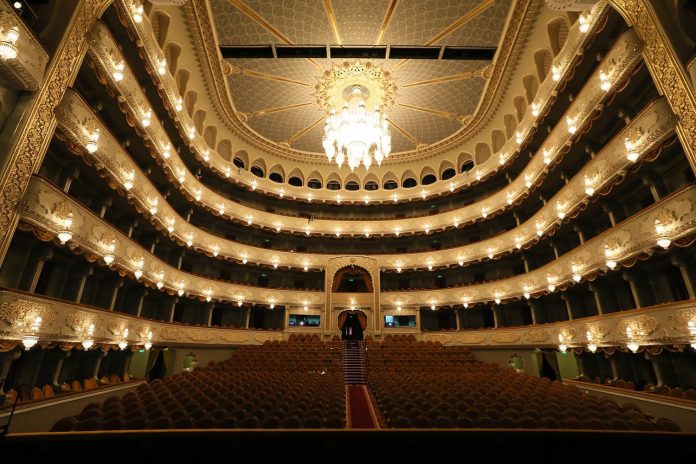 The Tbilisi Opera and Ballet Theatre in Georgia has been refurbished by the systems integrator Salzbrenner media in a comprehensive project from March 2013 to January 2016.

The Tbilisi Opera and Ballet Theatre or, to give it its full name, “The Zakaria Paliashvili Tbilisi State Academic Theatre of Opera and Ballet”, was founded in 1851, and is generally considered to be the leading venue in the Caucasus. After a major fire and a new design by an architect of German origin, Viktor Schröter, from Saint Petersburg, it reopened in 1896 and burnt to the ground again almost a century later. Once again, the restored building reopened after five years of reconstruction and experienced difficult times following independence in Georgia in the 1990s while time also took its toll on the building and equipment. This is why the building was completely gutted as part of a full refurbishment and is now equipped with state-of-the-art technology to support future productions. Salzbrenner media managed the planning, outfitting and installation of the audio, video and stage management equipment.

The current massive refurbishment was financed by Cartu, a fund owned by Georgian tycoon and former Prime Minster Bidzina Ivanishvili, the man who formed the Georgian Dream coalition.

After six years work the building has been restored to its former glory and the technical systems have been almost completely renewed. This has catapulted the facilities into the digital 21st century from the past outdated all-analogue systems. The systems integrator Salzbrenner media planned, documented, supervised, and installed the systems, following up with commissioning and training including a week of intensive training modules for the state-of-the-art technology.

Stage management control has progressed a great deal in recent years and the Tbilisi opera house now has an extensive stage management system from the Salzbrenner PerformanCeTRL product line. This comprises components from the DELEC’s oratis intercom series including a Talk 16 subscriber unit and provides all the audio functions and extensive logic programming, while Salzbrenner MediaControl handles the control — a symbiosis which also deals with the signals for the many cue lights labelled in Georgian characters. Wireless radio and partyline intercom is based on a combination of Riedel, Motorola and Telex components, all controlled by the DELEC and MediaControl systems. A video infrastructure with two Panasonic cameras, interfaced with SDI, routing processing and monitor screens complements the stage management system. Audio mixing in the main auditorium is taken care of by a 42 fader STAGE TEC Auratus mixing console in the sound control room connected via a NEXUS audio network with four Base Devices and a total of 77 I/O cards. 5.1 audio monitoring was installed alongside TFT displays from LG, a custom-made control desk and 30HU rack cabinet by Salzbrenner media’s mechanical engineering department, and multimedia equipment including recording and playout units.

Installation work in historic buildings always presents particular problems. Careful selection of equipment and thoughtful siting is essential to avoid detracting from the classic look. For this reason sub-woofers are located in the orchestra pit and 16 sophisticated KS line array loudspeakers along with two Seeburg column loudspeakers (curved cylindric wave), which are as unobtrusive as possible, are used for reinforcement. Alongside the audio and video cabling an extensive data network for general purpose signal distribution as well as control of all relevant system components (PA system, wireless microphone system, etc.) was also installed. For external productions (OB van / broadcast) additional video distribution was added, based on a TRIAX cable network.

With this lavish refurbishment and a modern, rock solid new technical infrastructure Tbilisi Opera is well prepared for the next chapters in its history.