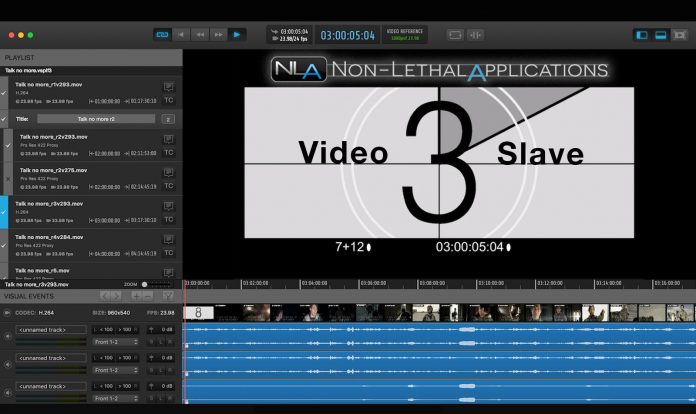 NLA began their innovative approach to create affordable, professional and dependable video playback solutions back in 2012. Now in its third incarnation, Video Slave is fast becoming the go to software solution for post and broadcast facilities and engineers looking for rock solid synchroniSed video playback when working with popular DAWs like Pro Tools, Nuendo, Cubase, Logic and Studio One.

Since its first release, numerous features have been added to aid users in different areas. The current version is now far more than a video player but also offers one of a kind dialogue recording features with tight integration with Pro Tools.
Video Slave 3 has been used in numerous high budget productions including Guardians of the Galaxy, House of Cards and House. Companies worldwide have relied on Video Slave including Warner Bros., Vice Media, Food Network and RTL.

Non-Lethal Applications Owner and Lead Developer Flo Loferer explained his decision and excitement to select HHB. “We’re thrilled to have the chance to announce HHB as our exclusive distributor for the United Kingdom! Given their reputation within the industry and their excellent reputation in the post-production community we are sure that they’re the best distribution partner in the market. We’re looking forward to a great collaboration!”