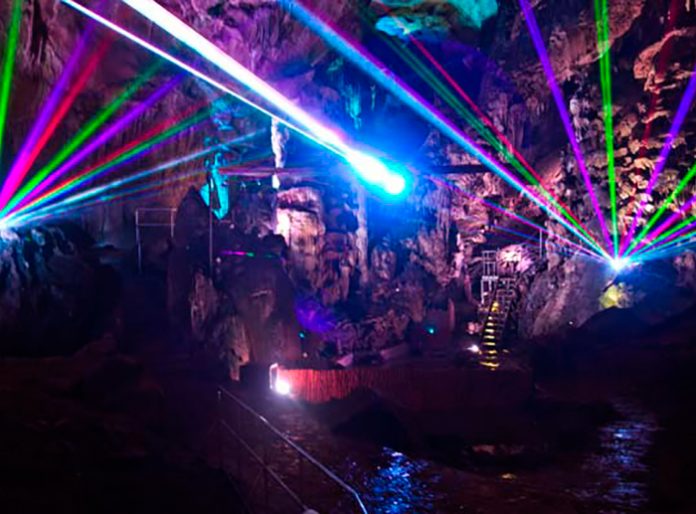 HB-Laser equipped the flowstone cave in Ledenika, Bulgaria, with advanced multimedia technology: Video, laser, sound, LED lighting, fog and water screens have been implemented to add additional attraction and explanatory media to the cave. The European Union supported this project with subsidies, and HB-Laser was chosen as project partner for the implementation, together with their local partner Factor in Sofia, Bulgaria.

Making a large scale, complex multimedia installation of this scale is very difficult: The high humidity and in some cases direct water spray requires highly protected equipment, which applies for the video technology, lighting equipment, lasers as well as loudspeaker systems.

HB-Laser not only implemented the technical equipment, but was also responsible for the complete multimedia control and wiring of the whole installation. Five main control boxes were installed (IP67 with air conditioning) to handle multimedia components: A six-metre water screen has been installed in the main hall, projections were done with 7000 ANSI lumens video projector and two HB-Laser LC-851 RGB 5.5 IP68 waterproof laser systems. In addition to that, 110 RGBW LED spots and wash lights have been installed – all IP68 waterproof. The spectacular lighting setup was flanked by a powerful PA loudspeaker system that was used for the show as well as for explanatory purposes.

The side halls and tunnels were equipped with additional 120 RGBW LED spots and wash lights – as well as with a HB-Laser LC-851 RGB 5.5 IP68 waterproof laser system for creating a volcano simulation. As special highlight a mystical scenario was created using a one-metre water screen element in combination with a 3000 ANSI lumens projector, showing the fairy of the Lake of Desire.

The German company HB-Laser is specialised in show laser light technology as well as in multimedia project implementations. They plan, design and implement custom and turn key projects all around the world.