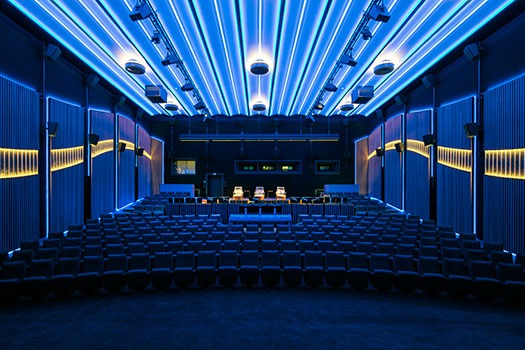 “We invited about 20 sound designers and freelance engineers as our guests to listen to a wide range of audio samples,” said Christoph Engelke, Technical Director, at Rotor Film. “Based on everyone’s listening experiences, a Meyer Sound system was the clear choice for our two top Managers, Holger Lehmann and Martin Frühmorgen, and myself.”

“So far, we’ve had a very good response from visiting engineers on the Meyer Sound system’s performance,” reported Christop.

Equipped with seating for 200, the 400sq metre room can be used to both mix and screen films. It features an Avid Pro Tools S6 mixing console with 64 faders and four Pro Tools systems running HD11 and HD12 software. In addition to a full slate of plug-ins from Waves, Altiverb, iZotope, and others, the studio also offers outboard effects by Lexicon, TC Electronic, and Eventide. Color grading is achieved with a Baselight TWO system on a Blackboard two control surface, and films are screened with either a Barco DP4K-32B digital projector or an all-format Kinoton film projector onto a 14.5-by-6.1-metre screen.

Rotor Film is located in the Babelsberg Medienstadt (Media City), a district of Potsdam that has been a centre for film production since 1912, as well as for television in recent decades. Historic films produced at Studio Babelsberg include “Metropolis” and “Blue Angel,” while more recent productions include “The Bourne Ultimatum,” “The Hunger Games: Mockingjay,” “The Grand Budapest Hotel,” and “Bridge of Spies.”