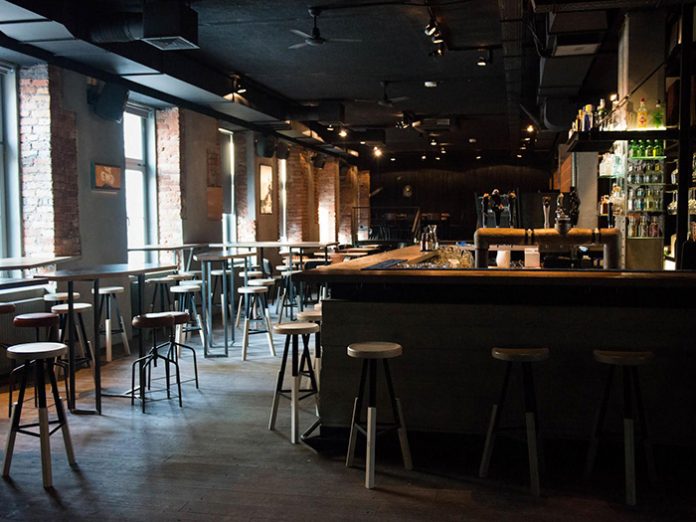 Located in the heart of Warsaw, Poznańska is a hotbed of social activity, with a booming bar and restaurant scene contributing to the area’s vibrant nightlife. A trio of stylish and eclectic restaurant bars – Beirut Hummus & Music Bar, Kraken and Grizzly Gin Bar – line up next to each other on this lively street, and all three feature premium sound systems which use Genelec speakers.

Each restaurant bar has a unique style and feel. Beirut Hummus & Music Bar is inspired by Middle Eastern culture, and its menu includes an impressive array of variations on its specialist dish – hummus. For the audio solution, Polish distributors and integrators Konsbud Audio installed six Genelec 8040 monitors, which are used to play a range of classic and alternative hits as well as songs from Lebanon and the Middle East.

In the same building as Beirut is Kraken Rum Bar – named after the legendary giant sea monster – which is decorated in a retro harbour style, and specialises in serving up a nautical combination of seafood and rum. Konsbud Audio installed four Genelec 8030 and two Genelec 8040 monitors in Kraken to deliver precise audio clarity.

The third and most recent addition to Poznańska is the Grizzly Gin Bar. This latest establishment is decorated in an American style, and aims to offer the largest selections of gins and tonics in Poland, as well as bourbon, whisky, wine and beer on tap. This is accompanied by a range of delicious American-style sandwiches and snacks. In the bar there are four Genelec 8040 and four Genelec 8050 monitors installed. The sound systems in the three restaurants are divided into two zones which are managed by an Allen & Heath IDR-4 installation mixer, allowing staff to choose the appropriate playlist to suit the three establishments – one zone covers Beirut and Kraken, and the second zone covers Grizzly Gin Bar.

“In Warsaw there are a lot of restaurants, but there is a lack of places where the owners put the same emphasis on the quality of the food, the decor and the music,” said Krzysztof Gałkowski, who is a part Owner of the three restaurants, and a passionate music fan. He is known for co-founding the Jazzgot club, a much-loved Warsaw venue which has gone down in city folklore. Later, Krzysztof was associated with the Hard Rock Cafe and ran Bang Bang Productions concert agency, where he organized concerts for a host of great artists. Recently he has focused on the development of the Poznańska restaurants, having developed them into inviting spaces for people who appreciate not only delicious food, but the aesthetic, attractive interiors and carefully selected background music.

“We chose Genelec speakers because of their quality, aesthetic looks and affordable price,” added Krzysztof. “We were looking for directional, near field monitors that would allow our customers to have conversations easily and at the same time provide a high quality audio signal. Genelec speakers play clearly even when playing at low volume. Another important aspect that we considered was the robust nature of the equipment and its cover. In the summer we open the window doors, so we need equipment that is weather resistant.”

The owners’ commitment to premium sound quality, stylish décor and well-chosen music has paid off, with the bars becoming a big hit among Warsaw citizens. Customers have noted the unique interiors, and premium quality audio coming from the Genelec speakers, which has helped to make the bars friendly, comfortable and inviting spaces for people who appreciate great food, drink, and ambience.