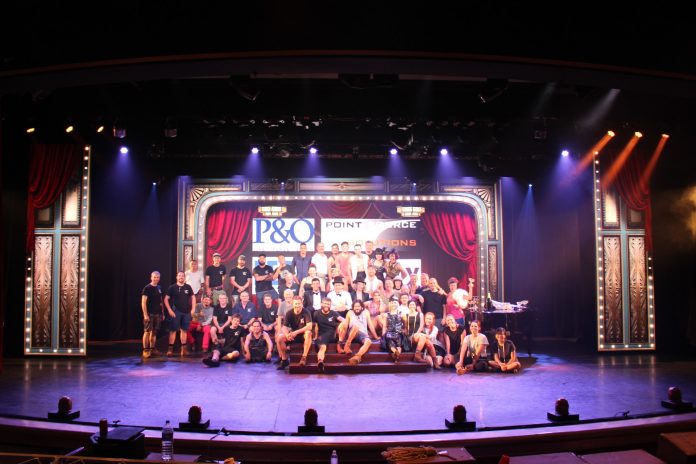 Brisbane’s Point Source Solutions are specialist AV integrators that pride themselves on making complex systems work. With skills across multiple disciplines, Point Source can do everything from event management, to networking infrastructure, to LED video screen design. With a diverse roster of clients, Point Source recently found themselves aboard two P&O cruise ships, the Pacific Dawn and the flagship Pacific Explorer, upgrading their theatre’s lighting system with High End System’s Full Boar 4 consoles.

With a rotating line-up of productions created for the global cruise giant by Sydney’s Grayboy Entertainment, theatre on the P&O line is just as complex and technical as it is on dry land. Grayboy’s lighting designer Gavan Swift is a dedicated Hog user and specifies High End Systems consoles for all of the P&O shows. As part of a major upgrade, both the Explorer and Dawn’s Full Boar 3s were retired and directly replaced by the latest Full Boar 4s.

“I specified the Full Boar 4 firstly due to its ease of use and intuitive control interface,” said Gavan Swift. “The second reason was that the Full Boar is a direct upgrade from the Hog 3 with similarities in how the two consoles operate resulting in less training for the on-board crew who have to program and operate the lighting console on a daily basis. Whilst the Grayboy production shows are the primary focus for the theatre on-board, there are daily events that need to be lit and a number of guest entertainers who need their shows programmed and operated. Ease of use and a smooth upgrade of the lighting control technology is essential and the Full Boar 4 was the perfect choice.”

“The Full Boar 4s went in beautifully,” said Point Source Solutions’ John Buchanan. “They were directly replacing a Full Boar 3 with DP8000 DMX processor, so all of the networking was already in place. Sorting out some minor universe issues took 15 minutes. The system on the Explorer is running a Pathway network, with Art-Net going to primary and redundant media servers, which run visuals to LED screens. That’s why we love the new support for CITP that means we get content thumbnails on the console.”

With Gavan Swift in to programme a new show, the Full Boar 4 gave him all the control he needed to get it plotted and running efficiently. “Gavan loved the ability the run four screens,” John related. “The two internal 15.6-inch touch screens and support for two external screens meant that Gavan could get all the visual information he needed while programming.”

From the integration side, John and Point Source appreciated the Full Boar 4s ability to handle multiple network protocols. “It’s extremely useful for us to be able to run sACN and Art-Net at the same time,” explained John. “We’ve found the Pathway Pathport Ethernet DMX nodes prefer sACN to Art-Net, but the media server they’re using needs Art-Net. The Full Boar 4 not only does both, it is rock-solid and stable – I have never run into an issue when doing this on a Hog.”

The Full Boar 4s life on the waves will be fully supported by Lexair, High End System’s distributor for Australia and New Zealand. “Lexair are fantastic,” John emphasised. “They are always on the phone if you need support. They are a great team that we have worked with for years. We’ve done many, many projects with them and have multiple ongoing right now.”