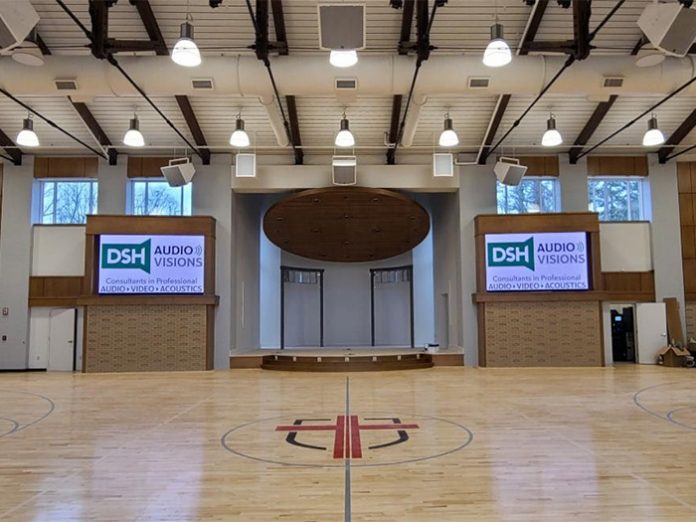 After a few years of congregation growth, St. George’s Episcopal Church needed an expanded worship space in addition to an indoor play area for their preschool. The church decided to combine the projects and build one multi-purpose space for sports, concerts, community events, and worship.

The church has a modern rock praise band that performs to the side of the stage directly underneath the main loudspeakers. This has the potential for feedback and low frequency buildup which can interfere with speech intelligibility and clarity of music.
Solution

St. George’s new multi purpose room was fully acoustically treated with a combination of absorptive and diffusive surfaces to reduce instances of slap and flutter echoes. David Hosbach from DSH Audio Visions designed an audio system around Fulcrum’s FH1596 Full Range Coaxial Horns suspended from the ceiling in groups of three at the front and middle of the space.

The FH’s broadband pattern control focuses sound directly on the congregation and reduces sound spilling onto the band below. The high output of the FH series products maximizes gain before feedback and creates a versatile system that delivers high fidelity sound at St. George’s.

“The amount of directivity can mean the difference between success or failure of a sound system,” says Hosbach. “The horn loading in Fulcrum’s FHs gives control to below 500 Hz which is critically important. That translates to significantly better clarity for speech and definition for music.”

Two of Fulcrum’s Sub215 Dual 15” Direct-Radiating Subwoofers were suspended at the front of the space between the FHs to enhance the low-end foundation for music. “The FHs create a fantastic full range system on their own,” says Hosbach. “We added the Sub215s to extend the system response to well below 50 Hz to maximize flexibility.”

“We have heard nothing but wonderful comments on the sound,” said Parish Administrative Officer Laura Zabaski. “People are ecstatic with the final results.”