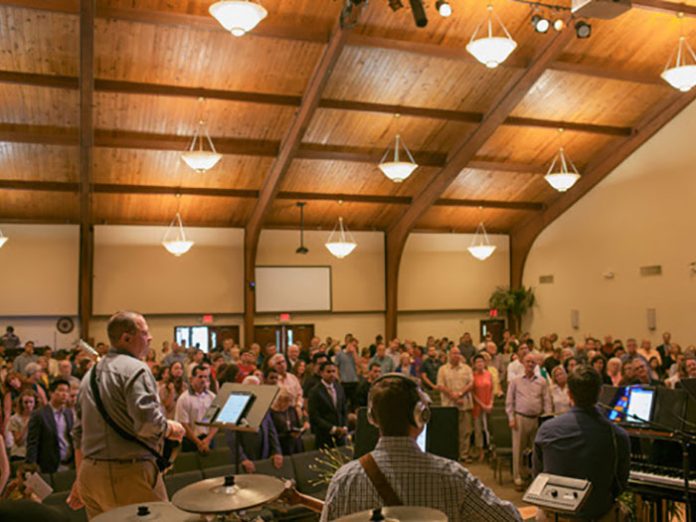 Located in Jupiter, Florida, Grace Immanuel Bible Church holds two identical worship services each Sunday with a smaller service Sunday evening in its 415-seat sanctuary.  Services feature a blend of traditional and modern worship music for all ages and cultures with several vocalists and a variety of instruments and percussion.  To support its worship services and special programs, Grace Immanuel recently acquired an Allen & Heath S7000 digital mixer with a DM64 MixRack and DX32 Expander.

Dan Kreider, Grace Immanuel’s Minister of Music, says the church’s special services may include a 12-voice mixed ensemble and an orchestra resulting in as many as 78 sources.  To provide separate mixes for its sound reinforcement system, while accommodating this quantity of inputs and simultaneously mixing in-ear stage monitors and live broadcast, the church had been cascading a pair of older, 32-channel digital mixers. However, this setup was complex to operate, the channel count was insufficient and the broadcast feed had seemingly reached its limits.

As part of their research into new mixers, Grace Immanuel contacted Kenny Bergle at Sweetwater who recommended Allen & Heath’s dLive S7000. Kenny spoke of his conversation: “We discussed several competing mixers, but I later recommend the dLive. Reason being is we could configure it with the channel count they needed and it had plenty of flexibility along with Allen & Heath’s great sound quality.”

Grace Immanuel’s mix booth is home to their new dLive S7000 Surface and the DX32 Expander for the church’s 16 wireless microphones.  The DX64 MixRack, near the stage, receives wired microphones and instruments and connects to the S7000 via CAT5 cables using Allen & Heath’s GigaACE dual redundant network link.  Dan Kreider stated he and his tech team were able to do most of the dLive setup themselves but persisted their appreciation of the training provided by local Allen & Heath rep firm, Mainline Marketing. Specifically he stated: “The dLive was easy to learn and we love the colour-coded channels, mute groups and recallable scenes which make it easy for volunteers to log in and mix simple services like weddings.”

The dLive’s versatile DSP allows the church to eliminate most of their rack-mounted effects. Additionally, Grace Immanuel Bible Church is using compression on selected vocals along with careful EQ. This process helps find each place in the mix and each service is recorded and broadcasted over Internet Radio and the church’s website via the dLive’s Dante feed.  Once finished, Dan saves the entire dLive configuration to a USB thumb drive for backup.

For its special services and programs, the church sets up multiple dLive layers and uses them with scene recall to provide extra flexibility while maintaining a simple workflow.  Dan concluded that the church is more flexible and revealed that the system has made the mixing more easier to use and varied: “We live on the touch screens and we are confident in customising the mixer.  The dLive has lots of flexibility and now, mixing is far simpler than it’s ever been for us. We plugged in the dLive on the first day and tested the pulpit mic and one of our tech crew walked in and asked what it was because we had never heard such great sound quality before.”