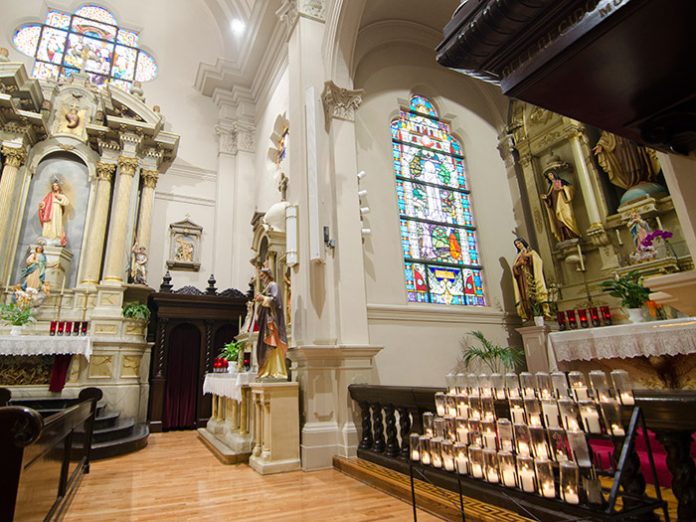 Built in 1914, the picturesque Five Wounds Portuguese National Church is one of the most photographed, sketched, and painted buildings in the area. The Old World-style Catholic church’s architecture exudes Iberian charm and grace, but its acoustics have proven problematic over the years, with intelligibility an issue for their traditional Latin Mass.

“This was a particularly challenging project because of the building’s age,” began Joe Orlando of Atwater, California, Systems Designer and Integrator Commercial Media Systems. “It took three guys a full day just to run wire to the loft. The building has old knob-and-tube wiring with 100 rows of live wires under the floor, and the grounding was almost nonexistent. And then there were the acoustics.”

Not surprisingly, the room’s ceilings are high and arched, and the sanctuary includes a transept. It’s the sort of space that gives system designers nightmares. The old distributed sound system was, Joe reported, “absolutely terrible.”

Joe called on Layer 8 president Rocky Giannetta, an expert in acoustical measurement, system tuning, and room modeling and analysis. Giannetta demoed a passive column and a Renkus-Heinz Iconyx IC16-RN, part of the next generation Iconyx Gen5 Series. “Rocky documented reverb times as long as three to four seconds at the back of the room – the kind of conditions that could be best addressed with steerable beams.” continued Joe.

Rather than opting for a L-R pair, Joe flew a single Renkus-Heinz IC24-16-RN digitally steerable column array on house left to serve as the main house loudspeaker. “Less is more in such a reverberant room,” he observed. “With two sources, you can have multiple arrival times and reflection issues from the transepts. The IC24-16-RN can give you up to eight separate beams, so you can do quite a lot with just one column.”
The IC24-16-RN is part of the new Iconyx Gen5 series, the very latest in the evolution of beam steering technology. Iconyx Gen5 integrates the power of advanced beam steering algorithms with the intuitive control of the newly redesigned Rhaon II system designer software.

On house right, directly across from the IC24-16-RN, a smaller IC8-RN steered array covers an area that needed a small amount of front fill. A CFX41 four-inch coaxial two-way loudspeaker provides monitoring for the main priest’s chair.

The church has a preacher’s crow’s nest with a spiral staircase; below this staircase, Joe secreted a Renkus-Heinz CFX12S 12-inch high-performance subwoofer, which delivers powerful sub-bass from 40Hz to 120Hz. “The subwoofer is hidden from view behind a cloth scrim,” said Joe. “It’s only used for music needing the lower octave, in order to not excite the room where it’s not warranted.” The non-powered CFX41 and CFX12S are driven with Labgruppen amplifiers. For microphone mixing, system management, and touch control, Orlando chose an Atlas Sound BlueBridge DSP.

Iconyx Gen5 loudspeakers are tuned with Renkus-Heinz’ new RHAON II software. “I like the original RHAON but the rendering in the new version is so much faster it’s awesome,” enthused Joe. “You can just snap your fingers, and it’s rendered. I was really, really, really pleased.”

Joe is sold on Gen5. “I’ve done a lot of installs for the Catholic Church with Iconyx,” he noted. “This was one of the first Gen5 installs anywhere, and the new series is the best yet. The combination of normal and progressively spaced transducers helped achieve excellent speech intelligibility in a very reverberant room. We could specify the size and configuration we needed, and we still hit our budget. Most important, the Iconyx Gen5 system sounds great in the space, and the client is very happy.”