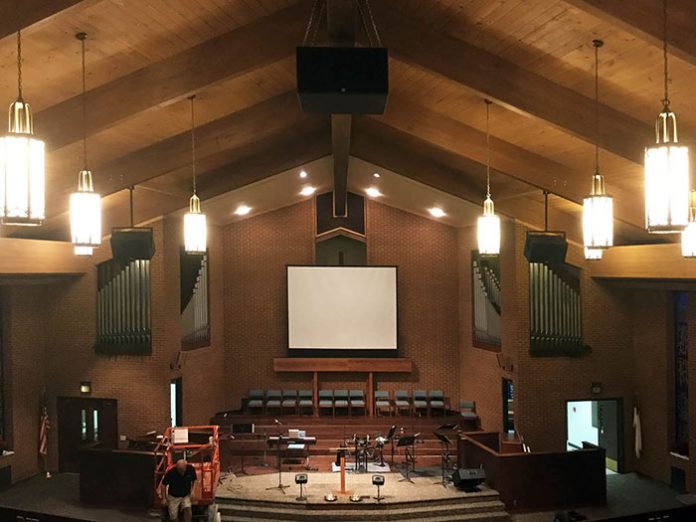 Like many contemporary churches, First Baptist Church of Manchester, Tennessee has undergone a transformation in the style and energy of its services. Years ago, services centred on sermons augmented by music played by organ, piano or choir. Thus, in a room that seats nine hundred, the demands on the sound reinforcement system were rather light. But that has dramatically changed. These days FBC punctuates sermons with a full band comprised of rock ‘n’ roll instruments. The church’s old sound reinforcement system just could not keep up. Audio/video integration firm Centerline Audio Visual, of Hendersonville, Tennessee, stepped in to design simple, yet powerful, stereo reinforcement consisting of two Danley SM-100B full-range loudspeakers buttressed from below by a Danley BC-218 subwoofer, with Ashly Audio nXp-Series network multi-mode amplifiers providing power, integrated DSP, and Dante connectivity.

Centerline AV President, Scott Oliver provided comments: “The architecture of First Baptist’s sanctuary is a little different. It’s not a box. The roof is pitched, and the room itself is a trapezoid; it’s about ten feet wider at the back than at the front. The Centerline philosophy is always to use as few components as possible because there’s generally a trade-off between the number of components and the resulting sound quality. More boxes can help with coverage when necessary, but it almost always comes at the expense of sound quality. For First Baptist, we gave them just about the simplest system you can imagine: a pair of Danley SM-100B loudspeakers and a single Danley BC-218 subwoofer.”

The SM-100Bs hang at a steep angle above either side of the stage, and the time-aligned subwoofer hangs from the centre of the ceiling, approximately one-third the way back from the front of the room. Centerline’s Greg McDougald managed the project, and Barlow Harlin of Harlin Technical Services, of Bowling Green, Kentucky, handled all the rigging.

Oliver stated that Dante is a favourable company to work with, in part because they have such an extensive catalogue of products. With an Ashly product, Oliver stated it is simple to find just the right power, channel-count, onboard processing, and connectivity to suit any particular job. At First Baptist, Dante connects all of the system components. A Soundcraft SI Performer console serves as user control for the new system, with an Allen & Heath ME-System for in-ear monitors.

Oliver concluded by explaining that Danley’s famously steep pattern control keeps sound off the walls to a large extent, which helps a lot with intelligibility and musical impact. And the Danley SM-100B is an especially great-sounding box.