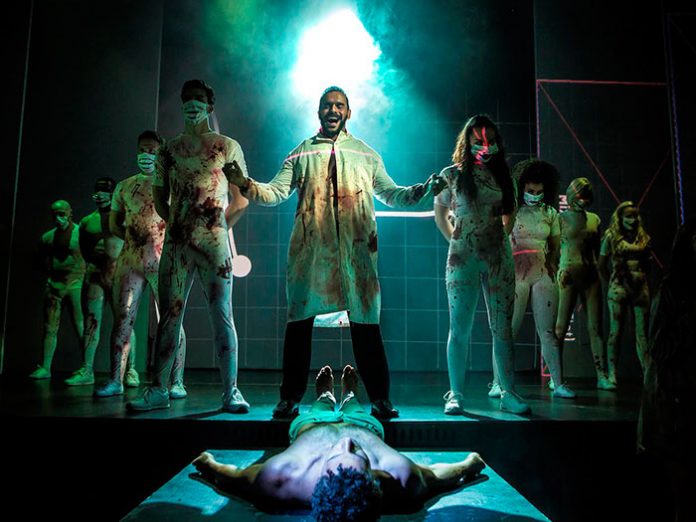 Recently, St James Theatre, London premiered EXPOSURE The Musical. The brand-new British Musical has been written by Mike Dyer and Quentin Russell and stars television favourites Michael Greco and Natalie Anderson. Alongside providing the lighting to The Stripper, which is currently running in the venue’s studio space, White Light has also supplied the equipment for this exciting new production.

EXPOSURE The Musical tells the story of young photographer Jimmy Tucker who faces the biggest challenge of his life when a stranger commissions him to find and shoot the seven deadly sins within modern-day London. Yet, throughout the night, a series of encounters with girlfriends, family history and the world of celebrity reveals there is more at stake than just money.

The Lighting Designer on the show is Ben Cracknell who commented the following: “Projection plays a huge role in EXPOSURE. It is used across the entire set in virtually every scene – with a fantastic video design by Timothy Bird. My role is to create a lighting design that fuses video projection with the live action whilst unpinning the strong musical nature of the show. I wanted to ensure that projection, lighting and sound weren’t separate entities but worked in harmony and became holistic. The songs in EXPOSURE are drawn from an eclectic range of musical styles so I needed to ensure my design matched every single one whilst maintaining a cohesive visual style”.

Ben added that he utilised the Martin MAC Viper Performances as their shuttering capabilities, which allowed him to crop and contain the lighting to ensure the video surfaces resulting with unpolluted light. Space in the wings was incredibly tight so Ben used GLP X4s as both a sidelight and also a discreet moveable footlight submerged within the front edge of the stage. He chose ETC ColourSource Profiles as follow spots controlled from the lighting desk, which provided incredibly precise control of their colour and intensity enabling Ben to match the lighting tones of the performers to the video environment. Again, this ensured that there was a beautiful cohesion between all mediums.

EXPOSURE The Musical has been produced in partnership with Getty Images and their iconic photo archive is featured throughout the show.

Ben concluded with the following: “The integration of animated video sequences combined with some of the world’s most recognisable images, along with an exciting musical score, has resulted in there being more than 1000 lighting cues on the show! These have all been time-coded with the music ensuring we provide the audience with a theatrical experience that they won’t forget.”