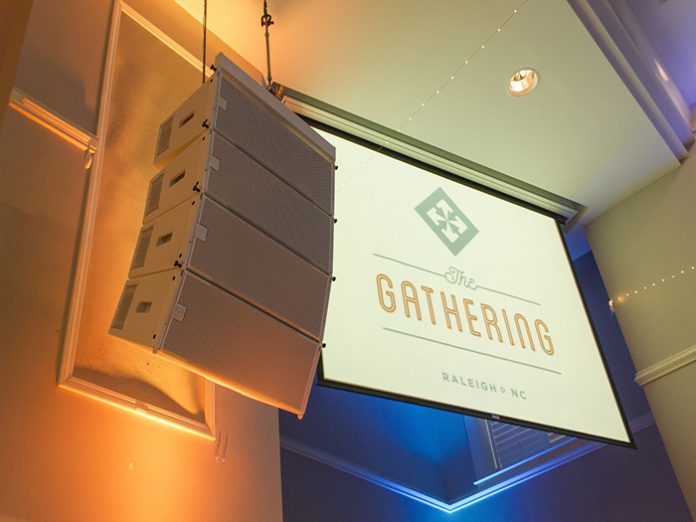 RMB President Cooper Cannady commented: “The system was designed for a site called The Gathering that measures 80ft deep by 80ft wide and holds a variety of events for the millennial audience, which required a very aggressive sound system for the electric ‘praise’ bands. The church opted for WPC because the control and directivity to avoid splash off the walls and other undue reflections with a system that definitely fit in their budget. So, we installed four WPC cabinets per side focused on the audience area to avoid the rear wall. The two SX218 subs per side are ground-stacked under the WPCs that are out of foot traffic while close to the front. The iK42 amps are remarkably efficient and sound very good. Resolution is two boxes per channel with two iK42’s on the hang and one dedicated to the subs.

“The downward sound trajectory hits the rear wall at standing height,” Cooper continued, “which works out because the wall is 20ft tall so we avoided 14ft of reflection surface and the ceiling, a problem with the original system. The room sounds really good from the first seat to the last, even to those standing at the main doors. Once you go out those doors, the sound dies down very quickly which is important because we didn’t want to leak into the main sanctuary even though it’s a very robust system.

“In addition to accurate and powerful music reproduction, speech is so smooth you don’t even think you’re listening to a sound system and noise rejection on stage is really good. Best of all, the staff is tremendously happy with Martin Audio speakers in general and now more excited with WPC. They all love the Martin Audio signature sound.”

Asked about the system, Dave Clemmer explained: “In addition to the WPC boxes, SX212 subs and iK42 amps, the setup includes a Midas M32 FOH mixer with a DL32 16-channel digital stage box in a house right position about 75 ft. out from the stage. In terms of the room itself, the WPC system eliminated most of the problems like splash, reverberation and excess noise. We just had to shoot the room and, by controlling the amount of output, we could direct it so that every box goes to every part of the room and covers the space from 10ft off downstage edge all the way back to a small balcony in the rear of the room.

Dave concluded: “The sound quality is just amazing––the clarity, separation and sound pressure. Also, the ability to direct the audio so you can get nice clear reproduction for the band without the volume getting too loud. The aesthetics are appealing, it’s a nice clean fly. And key staff members and congregants are really happy. They keep congratulating us on the sound quality. WPC has been very well received all around.”