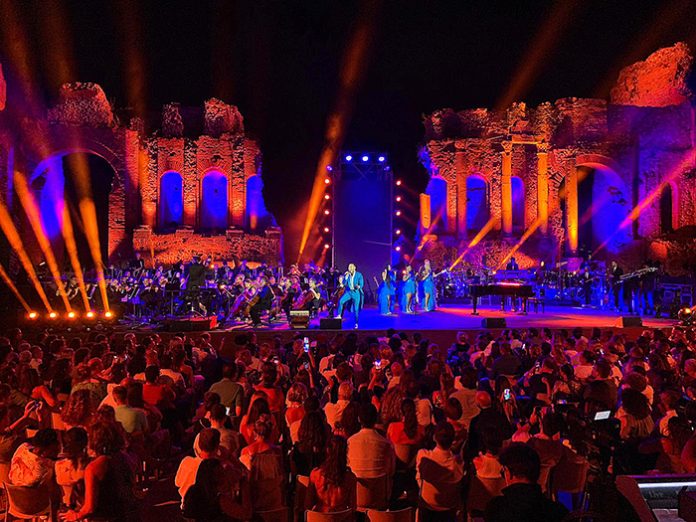 The Greek Theater, described as one of the most evocative places in the world, has been accommodating performers since the third century BC. Located in Taormina, Sicily, the stunning, historical venue is set upon a high point in the city overlooking the Calabrian coast. The natural setting makes it an entirely unique place to accommodate concerts and some of the most innovative modern performers. The venues most recent attendee was the world-renowned star of modern soul, John Legend, therefore, the venue needed to be at the highest standard to match such a legendary performer.

A venue like this needs an intricate design team behind it that, as well as making it reach its performance potential, doesn’t take away from the natural history of the ancient site. Therefore, Madema Italia was brought in the oversee the overall installation. The rental company DTS Lighting were behind the venues illumination and the outcome was an extraordinary concert that merged great music, millennial history and landscape magic into an incredible event.

Nicola Mongi, Lighting Project Manager at Madema Italia, commented: “The Greek Theater of Taormina is a beautiful complex. Being a historical masterpiece, whose perfect preservation is protected, there are technical constraints to be respected. There are two truss systems pre-arranged on the right and left that let you illuminate the stage with side lights, and another small structure, in front of the proscenium, for front lighting.

“You can’t set up large structures; there is a fixed pre-set-up consisting of halogen lights, and when an event takes place the production replaces it or integrates it with its own lights. For the John Legend concert, I did a lighting project based on my own idea, although I had never been to the Greek Theater.”

The installation comprised of 186 DTS projectors including the RAPTOR, NRG 1404, BRICK, KATANA and WONDER models which fully satisfied the venue. RAPTORs were installed on the trusses by the FOH, to give greater depth and the NRG 1401 units were installed for backlighting and to further colour the stage.

The LED wash fixtures and various projectors were used to give different depths to the structures of the theatre. Some NRG 1401 units gave an architectural wash and the stage was coloured with the WONDERs in the larger spaces, such as the walls to the right and left and the inside of the arches placed in the background. Highlighting their surface and some details were the BRICKs and lighting up the columns set to the right of the stage were the RAPTORs, to render the different volumes. The KATANAs were placed in background to mark the stage outline and colour it with a grazing, vibrant light.

The project was a success and painted the historic venue in a new light. Such a delicate, classic setting like The Greek Theater may not be the first location that springs to mind when thinking about a pink neon hued pop concert but DTS Lighting breathed new life into this ancient, iconic venue.

Nicola concluded: “The choice of DTS projectors was perfect because they are all very compact and lightweight; the stage space – mostly dating back to 2,300 years ago – is obviously to be treated with the utmost care. The atmosphere inside the Greek Theater was beautiful and the projectors integrated well with the unique space!”