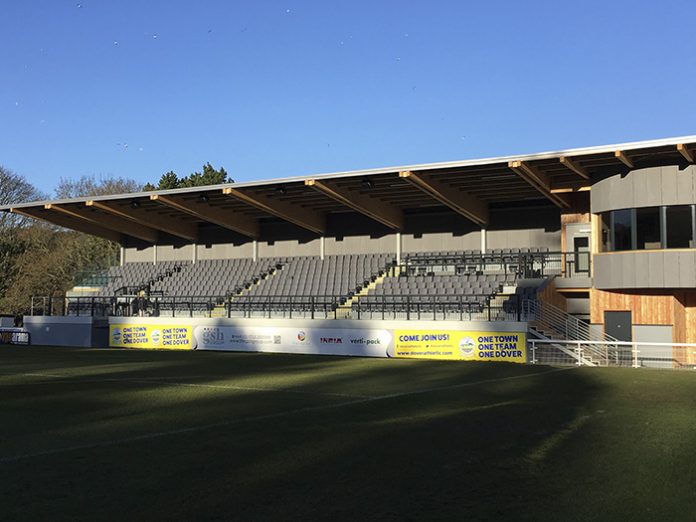 National League football club Dover Athletic has substantially invested in the facilities at its 6,500-capacity Crabble ground in Kent, both to meet the Football League criteria, and also provide a better match-day experience for its supporters.

The centrepiece is the new £1.3m cantilevered Family Stand, which aside from providing a further 500-seats and improved facilities for players, officials and disabled supporters alike, required a state-of-the-art public address system.

Old Barn Audio (OBA) were awarded the contract, and as they have on so many occasions recommended a Martin Audio CDD (Coaxial Differential Dispersion) solution – in this case dipping into the WR series.

“The weatherised CDD-WR was the perfect choice,” stated Director, Phil Clark. “And with 32 enclosures installed it is the largest CDD-WR install yet in the UK.”

The company first carried out a demo for the club chairman, Jim Parmenter, using CDD10-WRs. “He was extremely impressed with both the quality and dispersion,” said Phil.

As a result, OBA’s contract was extended from the Family Stand to all four stands spread over seven zones. The new design would replace a simple 100V horn based system.

The system integrators undertook a site survey which took in the Dover End and River End stands behind the goals and the main stand containing the VIP boxes and Press seating which faces the new all-seater Family Stand and Clubhouse.

New TV comms all formed part of the new extension, which required replacement of all the old electrics, whereas we were able to tie into the existing infrastructure on the other stands. Commentary for the TV broadcasts is provided from the new control room.

In terms of speaker deployment the new Family Stand has been equipped with four CDD10-WR, fixed to the leading edge of the roof, all angled down using standard flying yokes to tilt the angles accurately and ensure even coverage.

The 541-capacity Dover End away stand now benefits from six CDD10-WR in a row along the front leading edge in two banks of three (one array angled out and the other reversed) in order to respectively cover the walkway in front of the stand and the supporters in the stand itself. This stand, being for away supporters, can be addressed independently for advanced post match evacuation purposes. The facing River Stand offers an identical loudspeaker spec.

The Main Stand is divided into two, bisected by the VIP box and Press seating, which covers two levels. The former is equipped with four equally spaced CDD8-WR at either end – each block variously pointing in opposite directions, while a further pair of CDD8-WRs operate under separate remote volume control for the VIP box and a pair of CDD6TX-WR covers the Press seating. Finally, the Clubhouse has been equipped with four of the smaller CDD5TX-WR around the outside of the building.

Phil said: “This is our first football stadium using CDD-WR and we have managed to deliver a fully integrated set-up, complete with cabling headroom for further extension. While the layout itself was fairly straightforward it was the vastness of the site and 1.5 miles of armoured cable required, that proved challenging. All had to be terminated correctly, secured neatly on cable trays, as high priority was placed on tidiness throughout the site.”

He said they also designed the system to be “bullet proof” while true integration was implemented with the aid of intuitive custom control panels on a 10in tablet to control mutes, volumes,  all linked to the Fireman’s Mic for evacuation purposes. The entire system is driven by Powersoft amplifiers and controlled by Symetrix Solus NX DSP.