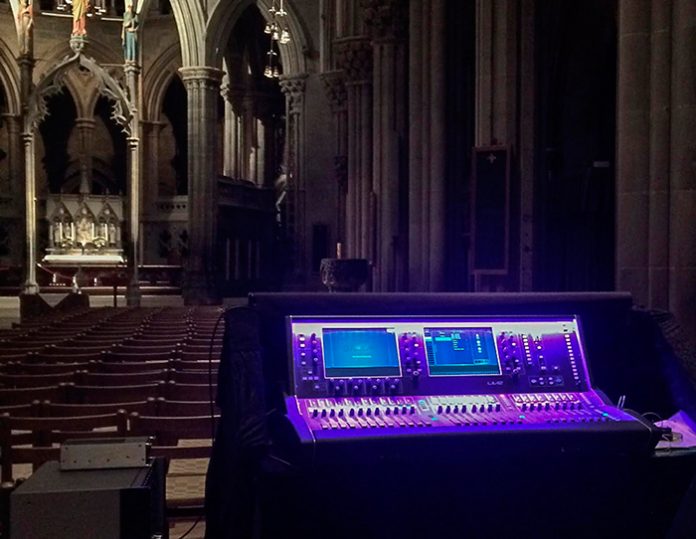 Norway’s renowned Nidaros Cathedral recently underwent a major upgrade to its audio system, based around a Dante-enabled dLive digital mixing system, with an IP6 for daily remote control, and a DX32 expander rack to provide additional inputs for live performances.

Established in 1066, Nidaros is the world’s northernmost medieval cathedral, the largest medieval building in Scandinavia, Norway’s national sanctuary, and houses relics of the Norwegian king, St. Olav. Attracting over 400,000 tourists a year, the Cathedral also hosts a plethora of concerts and performances each month, many of which are broadcast on national television in addition to the regular daily church services.

The purpose of the installation was to provide the Cathedral with a central, remote-controllable system replacing the previous system, which consisted of several separate units and extensive analogue cabling. Other requirements were to provide a comprehensive control surface from which to comfortably run larger performances in two locations, and use the system surfaceless to provide a simple, intuitive and reliable interface for day-to-day use, such as the running of services and guided tours.

Supplied by Allen & Heath’s distributor, Benum, a S5000 Surface with DM48 MixRack was selected. The S5000 is installed in a mobile rack and can be connected to either of two Cat5 patch points, which terminate in two GigaAce ports on a DM48 MixRack. An IP6 is provided for daily use, programmed to recall presets with matrix settings for the numerous lecture positions in the cathedral, and providing level and mute control for the channels associated with each of these positions. The existing analogue input/output boxes spread around the hall are connected directly to the DM48 inputs/outputs, and the dLive manages a Shure mic wireless system and 16 Renkus Heinz Iconyx speakers via Dante.

The DX32 is rackmounted on a mobile unit, to provide additional I/O for larger performances, and connects directly to the surface. In addition to the two mixing positions and the IP6 controller, the levels can also be controlled via a dLive iPad app, plus there is also a computer in the technical room in the crypts loaded with dLive Director control software, offering remote support when necessary.

Head technician for lighting and sound at the Cathedral, Ragnar ‘Timmo’ Aune, says: “The dLive system is incredibly easy to use and totally stable. It provides me with all the processing tools I could possibly need while retaining a completely uncluttered, easy to navigate interface. The clerks and other daily personnel also find the IP6 controller extremely simple and clear for their purposes”