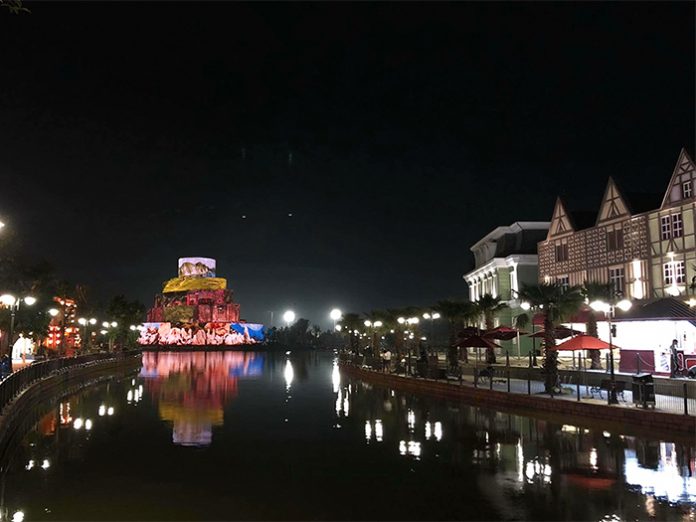 The project features a replica construction of the Co Loa Citadel, a fortified settlement and archaeological site, which was an important political centre of the Vietnamese people until the 10th century. Tran Linh, which has done many 3D video mapping projects in Vietnam, was charged with mapping the curved, tiered replica citadel with stylised landscapes and seascapes that tell the traditional Vietnamese story of the historic landmark. The 3D video mapping show plays nightly to an audience of approximately 2,500 people.

“When we were mapping the Hill of Wishes the biggest problem we had was the many steps and different levels of the structure,” said Duc Nguyen. “Using conventional methods, we would have had to cover each step with a separate projector, but with the help of disguise we were able to cover three tiers with one projector. To be honest, I was not really confident this could be done until I saw the results, which amazed me.”

Duc was using the third-party Mapping Matter software to do their projection studies analysis. “Its coordinates could be input manually into disguise, and that helped me a lot for configuring the projector in the media server,” he said.

“disguise then acted as the master playing the LTC tracks to synchronise lighting and laser elements,” Duc explained. “We chose disguise for its well-designed user interface, the fact that it was easy to learn and its ability to simplify configuration and quick projector calibration for any rush events that might come up.”

“We appreciate the support we received from disguise,” Duc added. “We are very happy with the results of this project!”