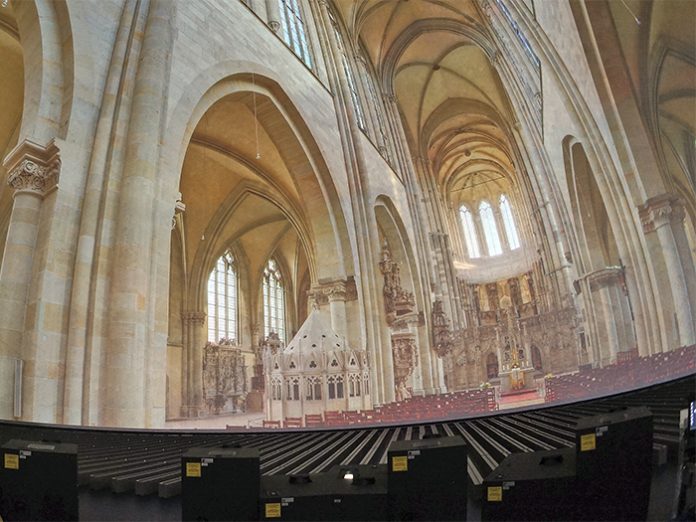 The Bundeswehr Technical Center for Information Technology and Electronics (WTD 81) recently upgraded the complex visual setup at its target simulation dome (ZSD) with the help of a collaborative team with members from project: syntropy, who was contracted to design, install and commission the new projection system consisting of 41 Digital Projection HIGHlite Laser WUXGA 3D projectors, and domeprojection.com.

The overhaul was undertaken on behalf of e.sigma Systems GmbH – a specialised supplier of integrated training solutions for international armed forces, security agencies and industrial clients.

During the project, the entire infrared projection system of the target simulation dome was renewed.

The dome at WTD 81, which is situated in Greding (Bavaria, Germany), is used by the Bundeswehr (the unified armed forces of Germany) to test the accuracy of weapon systems and individual components, from tanks to missiles, in realistic 3D simulations of battlefield scenarios, both in the optical and infrared spectral range.

The dome structure stands at an imposing 26m high and measures 46m in diameter, making it one of the world’s largest self-supporting dome in prefabricated construction.

The projection area inside the dome is 40m in diameter, with a screen surface of 2,200 sqm. The surface itself is made of more than 94,000 thin polygon metal plates in different shapes, which asks a great deal of the projection system design, as well as the calibration.

“We were originally asked to help with the dome’s colour calibration using our tools,” said domeprojection.com’s Christian Steinmann. “We tried a calibration with the existing projectors, but it proved to be an impossible task. The projectors were dated, they didn’t have enough brightness and there was no edge-blending capability, as the content was simply tiled.”

Despite results improving somewhat after domeprojection.com’s initial calibrations, the WTD 81 decided a complete refurbishment was the best course of action.

Lars Richter, project manager at project: syntropy, picked up the story: “We were tasked with renewing the projection system in the dome, which came about as the existing visual display system didn’t fill the entire field of view. It also had low resolution and brightness and had to be calibrated manually. A lot of the problems came from the fact that the existing projection system was UHP lamp-based, which means that the existing projectors had to be realigned regularly following lamp replacement. Realignment was done manually and this high maintenance workflow resulted to down time, which was not compatible with the end user’s needs.”

EMEA sales & marketing manager for Digital Projection, Dirk Siedle, gave further details on these problems: “Customers with lamp-based projectors face the issue of a relatively fast decline in brightness output in a cycle that repeats with every lamp replacement, so every 500-2000 hours. If you plotted that on a lumen maintenance chart, you would see a pretty dramatic lumen roller-coaster.

Lars continued: “The customer requirements for the projection system were extensive and included a brightness at screen surface of > 120 lux, an individual contrast of 1,600:1, a lifetime exceeding 10,000 hours and a low level of noise emission. They also needed a precise automatic realignment system to reduce maintenance time and elevate overall precision.”

It required the knowledge of an experienced systems integrator to come up with a creative and yet deliverable system design to fit it all the challenging requirements including space available for projector installation.

The main challenge in the design was the projector placement which needed to guarantee that each pixel to be seen from the working volume defined by a 2m radius sphere in the center of the dome is not more than 20° of the ideal reflection rays. This is due to the ultra high gain of the screen. To make it even more complicated the area to put projectors was over all very limited and the requested low noise levels required special housing of the projector not obstructing the field of view but allowing sufficient cooling for the projectors. project syntropy’s long years of experience in high end projection system design and it in house tool set came into play to fulfill all these challenging requirements.

The domeprojection.com software was key during the installation, with a great deal of calculations having to be made before anything could be put in place. Christian explained: “We positioned a camera at the center of the dome, which allowed to recognize all of the projection areas. We then tested to verify the geometry accuracy and ensure that the systems could work together.

“The first test was done using a laser pointer on top of the target system manipulator. The manipulator moved on a precise pathway and this ‘path’ was projected with the visual system. The resultant divergence was now as small as 1.7 arc minutes”

He continued: “In the second test, we projected a marker by using a theodolite to measure the points as precisely as possible. The divergence was <10mm on the dome surface.
Color calibration was then achieved using the ProjectionTools ColorCalibration add-on with a Jeti spectrometer.”

The proprietary software used by e.sigma during the simulations was also revamped during the upgrade. By closely collaborating with domeprojection.com, e.sigma developed an interface to import the warping & blending directly into the software itself.

Once installed, the system would have to be able to perform a variety of tasks, as Roland Bals of e.sigma explained: “The dome is used to test weapons systems that can defend against land, air and sea threats. Another range of tasks is the investigation of guided missiles, especially their seeker heads. Modern seeker heads and weapon systems typically have detectors in the wavelength range from ultraviolet to infrared. The projection surface of the ZSD has a specially developed reflective surface, which makes it possible to reflect both static and mobile signatures of targets with approximately 100% throughout the spectral range.

“The devices (test specimens) to be examined can detect and track the targets due to the reflected radiation. The target scenarios are reproduced in their presentation and dynamics in such a precise way that the behavior of the fire control loops of the test ring can be recorded by measuring.”

He added: “Another important task is to investigate the disreputability of available weapon systems and missiles. The currently known interference measures from electronic warfare are to be tested on the available systems in order to be able to make statements about their effectiveness. The overall representation of a scenario takes into account the influence of terrain and clouds, as well as daytime and weather. The shape and orientation of the targets on the projection surface is realistically mapped to enable target tracking by the sensors of the test specimens.”